I walked into my local Jack in the Box after school and asked if they were selling the bacon shake.

“Bacon shakes?” said another customer, a man holding a toothpick in his mouth. “BACON SHAKE? What is that? Is it a shake that tastes like bacon?”

“Bacon. In a shake.” The man shook his head. “Is it good? Does the bacon shake really taste like bacon?”

She said no. “I don’t know how to describe it…it’s not salty, because of the vanilla.”

I got a large for the kids to split. 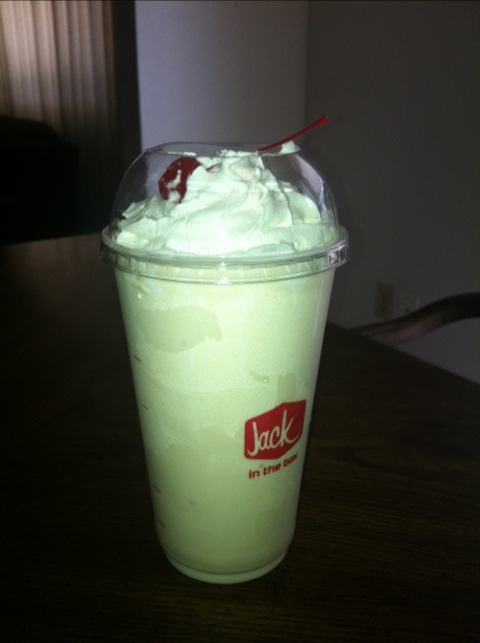 It does taste like bacon, only it’s delivered in a creamy milkshake, so it’s weird to not have the crunch. But definitely bacon. I only had two spoonfuls because it was pretty rich and my stomach kind of protested immediately, but the kids. The kids love it. They reported bacon bits in their portions (I didn’t see them and they said they sucked them down already).

So the bacon shake is an okay kind of good to me– I didn’t want more. The kids, however, are sucking the bottom of their glasses dry. I think it’d be worth trying, even if you had to just go in and ask for a sample first to see if you liked it. The large (pictured) cost $3.79. You can get a small or large, no medium. Even better: split it. The girl offered me extra cups and spoons to split the bacon shake on the spot.

9 thoughts on “Jack in the Box Bacon Shake”