See this. Recognize this man? 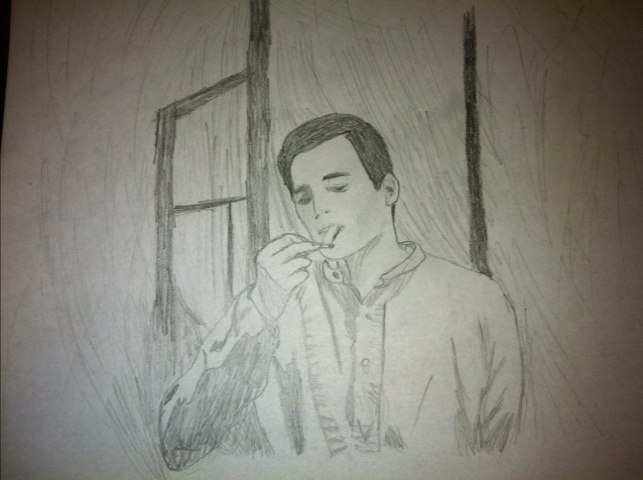 It’s the deliciously evil Thomas from Downton Abbey. And this fan art is the work of my 12 year old. Yes. No Justin Bieber and the like for her.

I found this awesomeness on her folder and asked if I could take a photo of it for my blog. She obliged.

I think I drew about this well during the one drawing class I took in college, where I majored in…art. Mostly I made mixed-media conceptual art. And I’m not that great at drawing humans (nor did I ever really practice that much).

I try to show her and teach her about as much art as I can, with mixed results (see our trip to LACMA). In Hawaii, she got to attend a Brian Selznick (author/illustrator of THE INVENTION OF HUGO CABRET) workshop. The kids were told to bring in their drawings. Afterwards, I asked her what she learned. “Nothing much,” she said. I have to say, I refused to believe she learned nothing much. Later she claimed she remembered nothing, except a few words he said to her about her work, when he asked if she wanted to look like the anime characters she was drawing or something like that.

From THE INVENTION OF HUGO CABRET

But I think everything she sees and does will ultimately influence her, even if she cannot admit to such a thing at this time. Particularly not to me.

And at this age, forget making suggestions. If she asks, for example, how I like the drawing, and I say it’s so totally wonderful I want to share it with the world, but suggest that she try using darker shades or some crosshatching, she will most likely only hear terrible awful talentless. This is why I don’t homeschool.

I guess that might also have to do with having somewhat of an artistic temperament. When I get feedback from my agent and he tells me which parts are great and then goes into detail on which parts need work, I panic because I focus on only the parts that need work.

However, the refusal to listen to suggestion goes with just about everything. If I suggest a book, she will most likely ignore it. Once I suggested LINNETS AND VALERIANS and she said Absolutely not, as if consenting to read a book I suggested would steal away her very soul, her very identity. Then she read it and told her dad she actually loved it, but not to tell me. Well of course I found out. And if I say she wouldn’t like something, she accuses me of using reverse psychology on her.

And no, I don’t think she’ll take up smoking because Thomas smoked. Or put soap out where people will slip on it, or copy anything else she sees on the show.

It’s funny. She’s always liked the more evil characters. When she was 2, she LOVED Captain Hook and Ursula. I took her to Disneyland and we saw Captain Hook and she wouldn’t go up to him in person, though. It’s probably because many evil characters are more complex and kind of more fun to watch, because you never know what they’ll do.