The other weekend, armed with lots of coupons, we headed to the Dole Plantation. They actually have a little train called the Pineapple Express, which takes you on a tour of the pineapple grounds. However, Ethan is long past his train-obsession phase, and none of us were interested in shelling out a total of $7 per person to sweatily look at pineapple bushes.

The maze, on the other hand, was worth it.

We whipped out our proof of local-ness, getting the kama’aina discount, plus a two for one. Woot. The maze is shaped like a huge pineapple and is apparently the largest maze of its kind in the world. If I could remember what “its kind” was.

After you walk in, there’s a big open spot that looks like a pineapple from above. The maze entrances are located all over the edges of the pineapple.

We had maze maps and we were supposed to go find stencils at hidden stations and trace them onto our maps. For instance, we had to find a mermaid and a train. 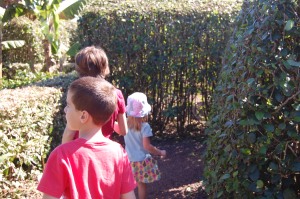 The maze bushes dwarfed Kaiya. She didn’t care for it too much.

I found the first station easily.

Then I asked Cadillac to find the next station, figuring that since he was in the Army and had to get some kind of map reading certificate he would be better at it. Rangers Lead the Way and all that. 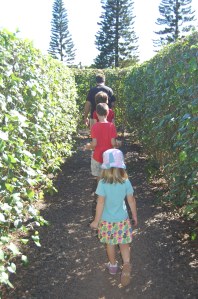 So of course there were, ahem, a few wrong turns. But we found the next station. And then one more. And the people were starting to get hot and burned and wanted their pineapple ice cream. Cadillac, however, wanted to finish the maze, all 6 or so hidden stations. Kaiya agreed with me and I pointed out that Cadillac’s un-sunblocked neck was turning red, so he agreed to stop his mission. One thing about my husband: once he starts something he wants to finish at all costs, no matter if the rest of his family is face-down in the pineapple top someplace, crying out hoarsely for ice cream. We’re kind of wimpy like that. The kids get it from me.

Anyway, we went and got ice cream and were much refreshed. Kaiya only ate part of hers before she said the brain freeze got her. Then Cadillac said he would finish hers, so she ran back. 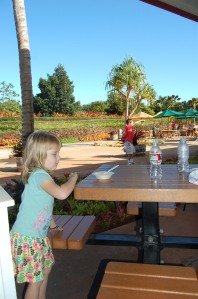 Ethan, who detests fruit, ate about half of his.

At which point Elyse dramatically stole his ice cream, being done with hers.

Then threatened me dramatically with a plastic spoon. 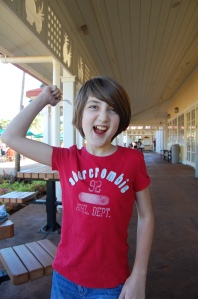 Cadillac said he would take the two older kids back into the maze to finish. They refused, full of ice cream and now too cooled off to go. He was displeased.

But he got over it.

Anyway, if you are on Oahu and decide to go, I don’t think you need a whole day, unless you really want to do the whole tour and you love pineapples. And if you’ve had the pineapple soft serve from the Tiki Room at Disneyland, then you’ve had exactly the same thing.

One thought on “Pineapple Express”