A few months ago, we began to experience a rat problem. They lived in the bush behind our house, the morning glory that wraps the fence. Morning glory is the devil’s plant– it’s related to poison oak, so it can give you a rash; and if you leave torn shoots on the ground, it will re-root. This plant is literally tearing down the fence and harbors all sorts of creatures. Since Kitty disappeared, the rat population went out of control. Rats came into the garage and pooped ignominiously on Cadillac’s tools (there’s not even any food on the tools!) and tennis rackets. We feared disease and rats setting up winter shelter in our garage, or worse, our car. We set traps with peanut butter and caught up to 5 rats per night for weeks. While I watched television or sat at my computer in the evening, I could hear them chirruping and skittering around outside. I heard thumps on our patio roof and turned on the light to see rats in the trees. When we went out to the garage to go to the car or do laundry, the rats would be outside on the fence near the garage door, boldly staring at us.

I saw an ad offering feral barn cats that needed relocation– a new home with food and shelter. They could not be kept indoors. I thought the barn cats might be a good solution to the rats, and perhaps the cat would let us pet it one day. A volunteer brought over two he’d trapped in central San Diego. The volunteers had taken them to the vet, updated their shots, and had them fixed. “We picked BBs out of these guys,” he said. “It’s not safe for them where they lived.” One was a seal point neutered Siamese, and the other a gray Siamese mix female. “The female will never let you pet her,” he said. “The male might.” The male had already been fixed when they found it, indicating he’d once been someone’s pet. The volunteer thought the male would do better because it was darker, and said the coyotes might get the female because the light color makes her easier to spot.

We kept them closed up for a while so they’d know this was home. I did not see them for about three weeks. We opened the garage again. Another week passed and we didn’t see them. We thought they’d run off for good. We kept setting out food and finally saw the male once. The litter box went unused– except by the rats, who pooped in that, too, as though they were mocking our efforts.

But one day, the rat traps went unsprung.

Then, one night, we saw Girl Kitty eating her food in the garage. I had Son feed her wet food every evening as I made dinner. Soon, around five, she’d hang out in the backyard, waiting. I meowed at her. She ran away.

I did this every evening– meowed. She sat and watched me. Then she began to meow back, rusty deep meows that made her sound like an old smoker. When a kid appeared, she’d run off. I don’t know where she stays.

Then, she began waiting at the kitchen door at the appointed mealtime. One day, I took a spoonful of wet food, squatted, and meowed. “Mrrooow,” she responded, and came forward. She let me pet her as she licked the food off. She felt thin, her fur coarse.

One afternoon, Eldest went out to the garage and shrieked. A lame rat lay in the doorway, its back legs broken and useless. Girl Kitty had brought us a gift. Too bad she hadn’t finished the job. She probably thought we wanted the pleasure.

Slowly, she began letting us pet her every night. My kids took turns feeding her. She allows Little Girl, to her delight, to stroke her head. Girl Kitty purrs. Her fur is thick and soft now, her purr sounding like an engine with oil added. She will eat right in front of us. Yesterday she came to the glass door and meowed right at us, indignant at having to wait. Tonight, she returned a few hours later, coming out when Eldest went to the garage, to get more petting from everyone. 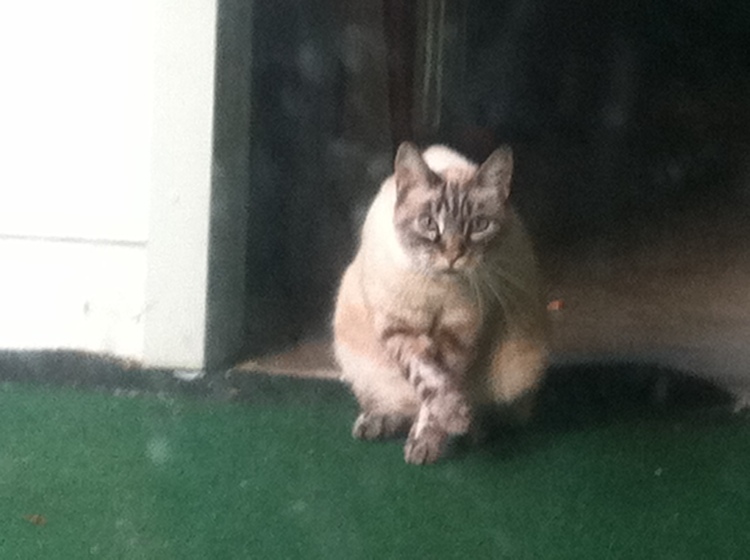 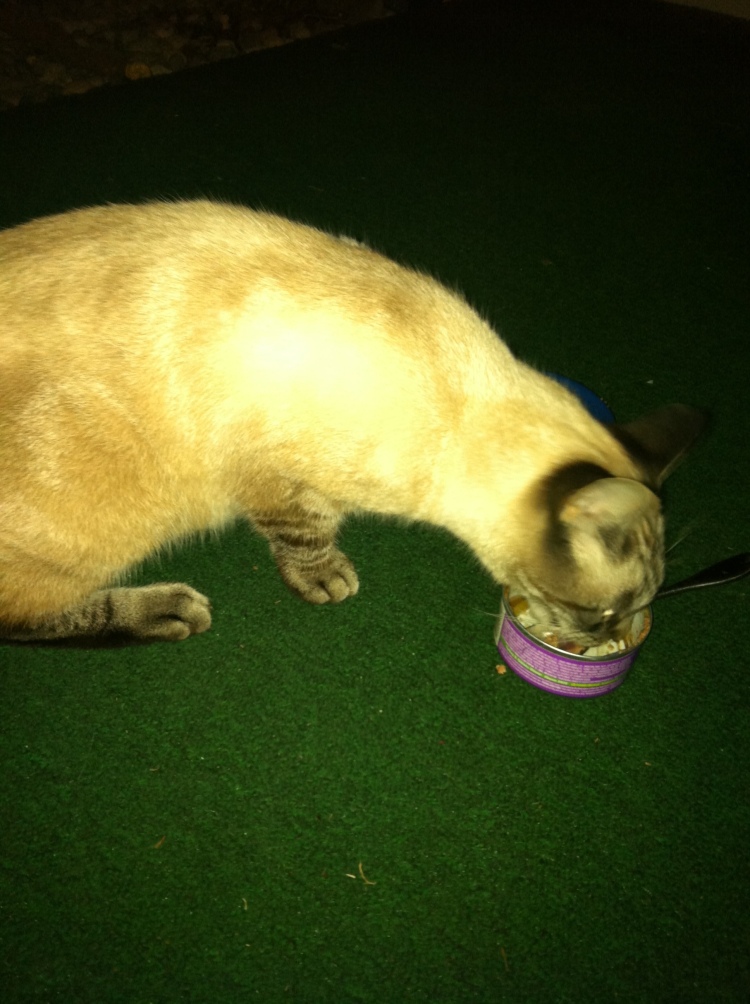