Comic-Con was in San Diego this past weekend, and it was a zoo. About 140,000 people attend. Then there’s more random stuff people can do downtown, so even more people who aren’t attendees go. It is elbow-to-elbow crowded, but people are generally pleasant and wear creative costumes, so it’s a fun atmosphere once you can actually get there.

I took Son on the Wednesday preview night. He does not like crowds, but we got his sister a Doctor Who screwdriver and he got a talking Dr Who Dalek and we got the little sister a harajuki unicorn, so he was satisfied and ready to go home. While we waited for Cadillac to pick us up, I bought him a cupcake, so he was pretty happy.

On Saturday I went with my daughter.

Here is some kind of space ship, which I saw while in line from across the street. I don’t know what it is (theme of the day! Me: what is that? Who is that supposed to be?) but there it is.

Outside the convention center, some religious nuts were protesting. There was a counter protest by Comic-Con attendees bearing signs like “Bike Riders Love Satan!” but I couldn’t photo them because the traffic guy herded us out of the street. 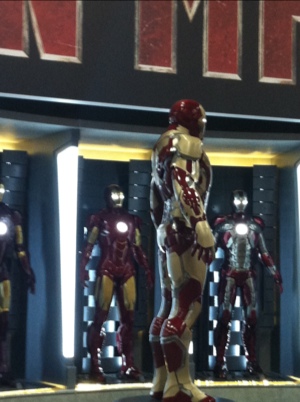 Outside, we went into the Grimm trailer and saw the Grimm artifacts. Cadillac and I watch Grimm with Eldest, and waited all season for Grimm (this will take too much explanation if you haven’t seen it, so if you want a recap, go to the Grimm website) to get some powers. That is, our mythological-beast-battling hapless detective had only his wits and his gun most of the season, but at the end everybody was KUNG FU FIGHTING! 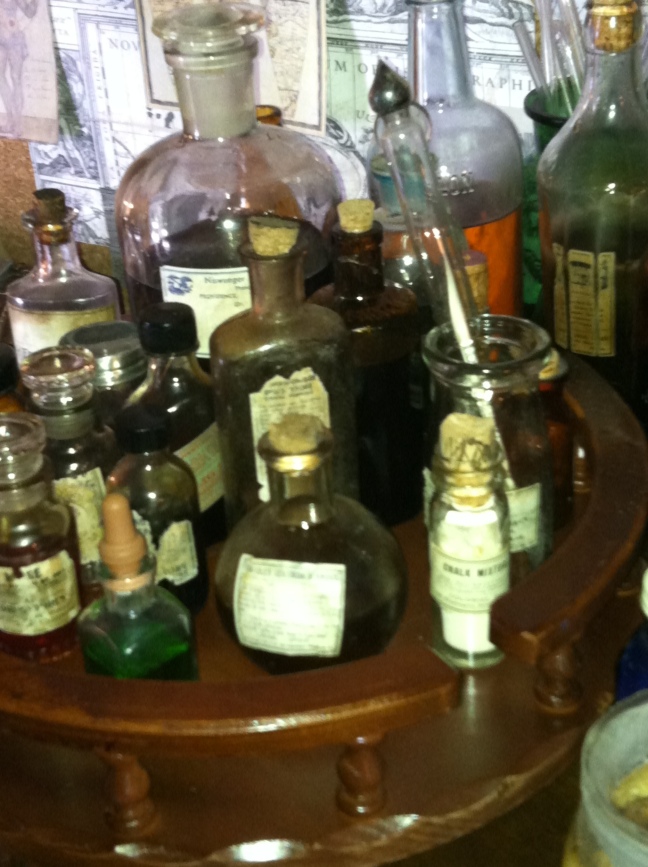 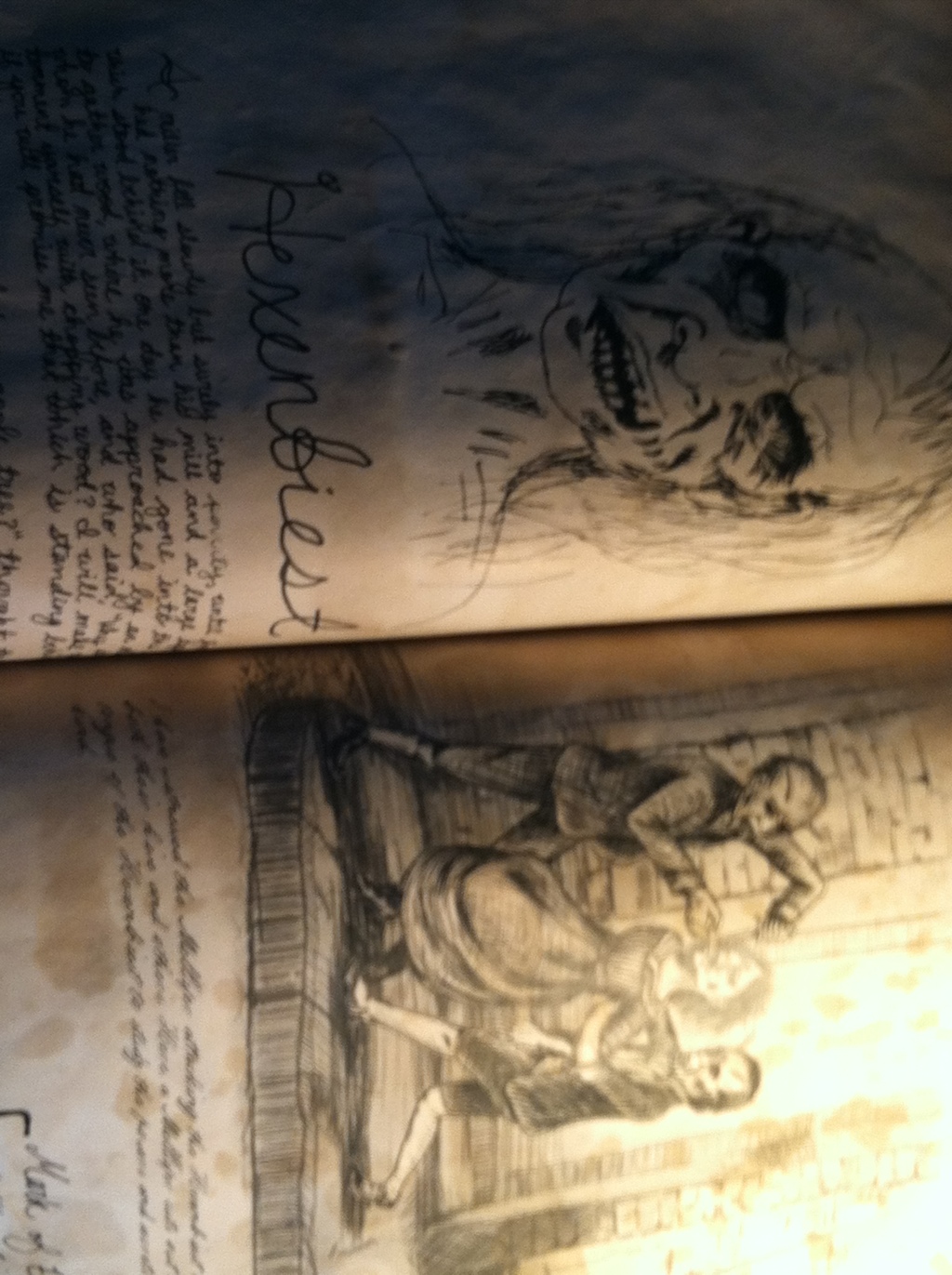 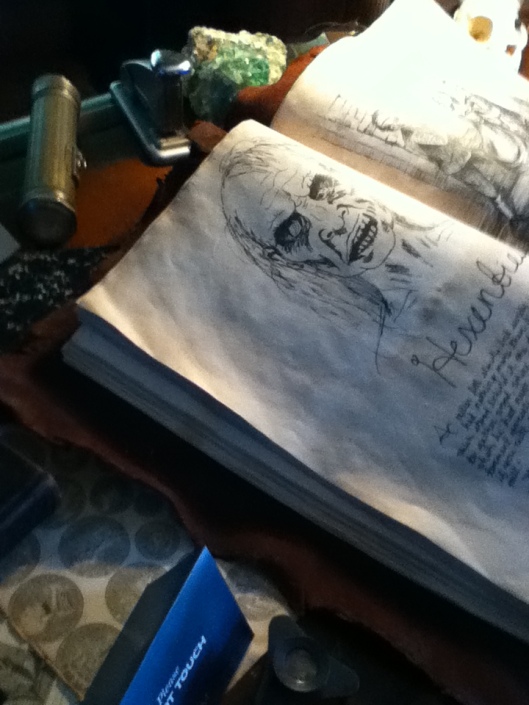 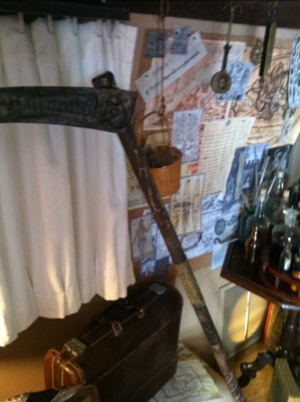 This is the super highspeed GRIMM tattoo you could get.

Funny story: outside, we saw a long long line kind of near the Grimm forest. I asked the guy in front of me, “What are you in line for?”

His family turned and looked at me.

They were super serious.

Anyhow, somebody else piped in, “It’s for the GRIMM tattoo,” so we got out of that line. Turns out the Grimm tattoo line was 2 hrs. I think we waited maybe 10 minutes to get into the trailer/forest.

The guy who worked for GRIMM had this tattoo, so I asked if I could take a photo. 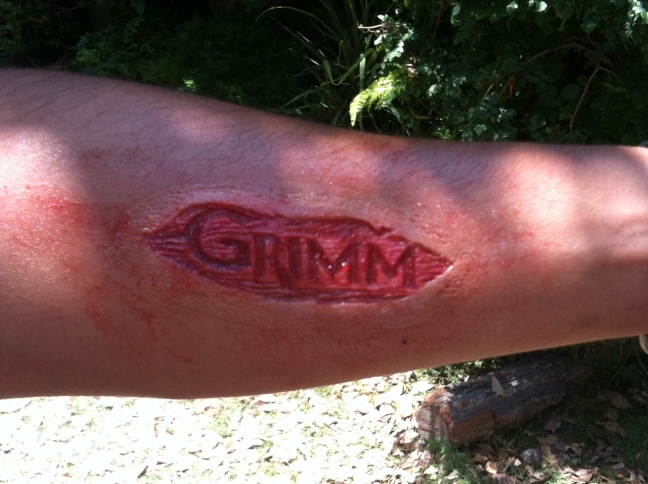 They gave us posters. Note the poster.

That’s the back of me. 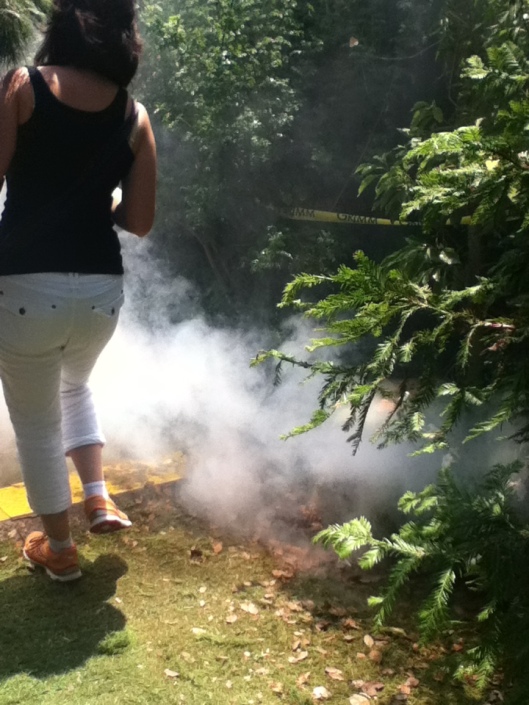 After we explored for a bit, we decided to try to see the Grimm panel in an hour. We found the line outside the ballroom. Not too long. It wasn’t the big standing-room only ballroom; it was a smaller ballroom. The guy told me the line was actually behind him. There were line breaks to allow for passersby. We followed the snaking line through the building, down a hall, outside, and MORE outside, to here:

Above are some princesses taking a break outside.

I did not think we would get in.

Eventually they let people in, and we were almost to the entrance when they thought they were full. But we got in!

Then, the usher ran out of seats and seated us in the RESERVED spots in the very front row. A Comic-Con miracle!

Still, my camera’s zoom wasn’t so good, and the lead (David Giuntoli, who plays Detective Nick Burkhardt) kept leaning back behind the red-headed woman (Bitsie Tulloch, who plays his girlfriend Juliette) so we couldn’t see him.

It’s so much fun to see actors in real life. They seemed happy to be there and totally down to earth, though that could all be a put on because, you know, they are actors. Who act. Anyway, they seemed to enjoy themselves and the audience hollered for everyone. Sean Hayes, from Will and Grace, is one of the producers, and also was there, along with the other producers/writers/creator, all of whom sat by the moderator and therefore are invisible.

They showed us Act I from the first new episode of the season. They are serious about cracking down on piracy. One of the ushers was more like a security guard and he was VERY VERY VERY serious about rule enforcement. You had to get a bathroom pass to leave the room. During the darkened part while they showed the episode, the guard used a night vision scope to look at the audience, ostensibly to make sure they weren’t filming.

I tried to make my daughter go ask a question during a Q&A, but she wouldn’t. She actually did think of some questions but all of them were sort of inappropriately highly critical (Why don’t they kill off the girlfriend? Why do the special effects look so cheesy? Why did Grimm not have any superpowers until the end of the season?) so both of us decided that no, she probably didn’t need to ask them. It’s funny that she can think of so many critical questions when she is such a big fan. 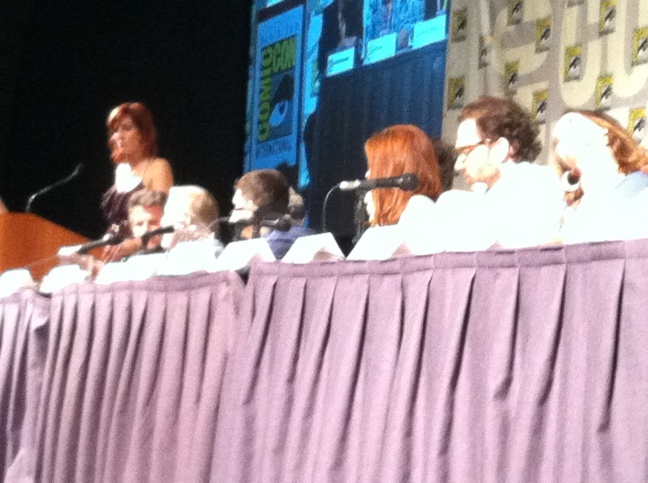 Then, they passed out tickets and told us to go to the “Fulfillment Center.” This was over at the Marriott. I had to consult the map three times, because you had to exit the center, go to the Marriott, go up the escalator, double back, and walk around some ballrooms.

It was quite a hike. “Will you be disappointed if it’s the same poster?” I asked my kid.

We got the same poster they gave out at the forest.

Those are the breaks. We did stop at a Marriott Starbucks, which had a line a quarter as long as the Convention center lines but cost more than a dollar more, so it wasn’t a wasted walk. And now we have extra Grimm posters.