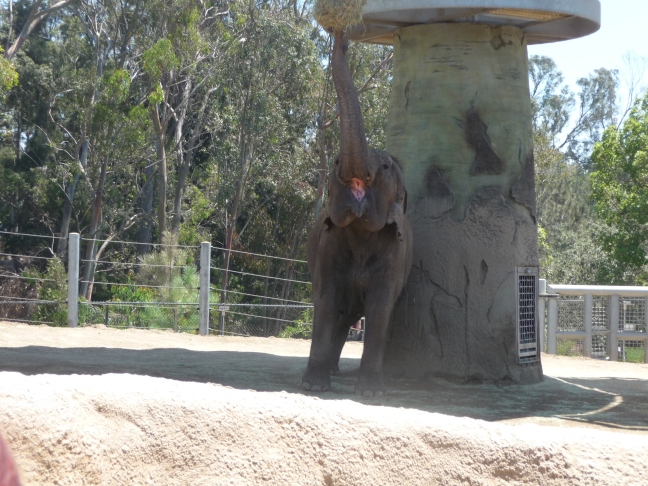 San Diego was part work and part play.  I hadn’t been off-island since I moved here over a year ago.  You might think you wouldn’t need a vacation if you live in Hawaii, but the truth is that living here is pretty much like living anywhere else, once you become acclimated.  You work, you take kids to schools, you go on errands. Lather, rinse, repeat.

Luckily, everything worked out work-wise.  The book event got set up, I arranged to meet with a journalist (Lois Alter Mark, who interviewed me for a great women’s website called StyleSubstanceSoul). I also went around to area book stores and signed their stock, which was also a nice opportunity to meet the managers and staff.  I brought along Hawaiian macadamia nut chocolates; all the booksellers were extremely appreciative. Warwick’s, an independent bookstore in La Jolla which hosts many big-time author events,  put me in their weekly newsletter.  I love Warwick’s and wished I’d had time to organize an event there, too.

Anyway, one of my to-dos was going to the zoo to see the Elephant Odyssey, the new elephant exhibit.  My friend SmurfyGirl and I went.  She refused to go on the Skyfari, saying it was too cold (say what? I know. I know you’re reading this, SG. Ha. But we got good exercise in lieu of Skyfari). She made up for it by buying me an ice cream cone, and because we walked approximately 200 miles, I felt the ice cream was earned.

It was neither too crowded or too hot. Which is funny, because people were complaining that it was crowded and hot all around me. Compared to Waikiki in the middle of summer, where the Honolulu Zoo is, the SD Zoo is neither crowded nor hot. However, the Elephant Odyssey walking path was oddly narrow, causing great bottlenecks of strollers and wheelchairs and pedestrians. The good news is the elephants have tons of space.

Here’s an elephant looking for a cookie hidden in the hay.

Here’s a view of part of the new vast space. 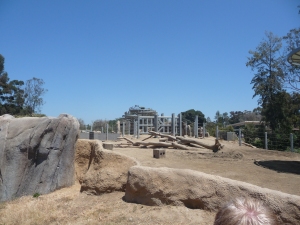 And above, here are the rather Jurassic Park-looking holding pens.  Those gates slide around into multiple configurations.  The keepers stand out there explaining what they do and what the elephants are up to.  There was one that refused to come out, though the keeper said he *could.*

Here’s the watering hole for the elephants:

Me with the extinct giant elephant whose name I am blanking on.  Colossus? It wasn’t the mammoth, which was smaller than this guy. This area also had statues of extinct animals. 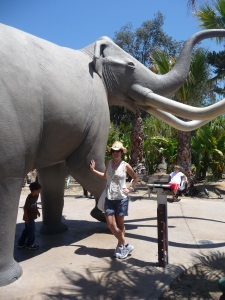 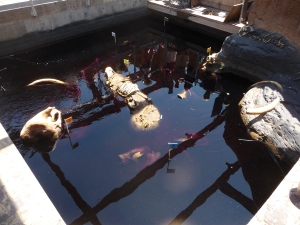 Above, a tar pit demonstration.  The tar goes up and down and you can ID what’s in there.  It’s not real tar, so it’s not stinky like the La Brea tar pits.

Next to the elephants, though not in the same enclosure, were big cats.

The lion was asleep, but here is his sign.

Then we walked all the way around the zoo, from the elephants past the polar bears up past the big birds of prey and over to the pandas.  And there was a long long line because there was an item in the paper about the pandas leaving the zoo.  Which would be an excellent way to get more people into the zoo, come to think of it. While I was in line I tried to Google the article but mysteriously couldn’t find it. A ploy? Very clever, zoo.

Initially the pandas were lounging about doing nothing, but this one sprang into action, perhaps smelling the beer of the person in front of me.  The zoo sells Coronas and possibly other beers which they pour into large plastic cups so zoo patrons do not ever have to not have alcohol out of their systems, because an hour or two without drinking alcohol would surely kill people.  I did notice there was no one smoking on zoo grounds, whereas I remember last year they had designated smoking areas. I don’t remember alcohol being widely available, so maybe they switched one vice for another? I dunno.

The other sort of interesting remodel was the reptile house. They made one side of it and the food market opposite look more or less like Bazaar del Mundo, which San Diegans will remember is what Old Town used to look like before it was remodeled a few years ago. So here they sell Mexican pottery and things.

I alternated between reveling in the fact that I was walking INCREDIBLY FAST, unencumbered by children to this zoo, for the first time without kids in, what, 11 years; and wishing my kids could be there to enjoy the zoo, too. I bought them all stuffed animals.

3 thoughts on “My summer vacation: part one”