I have a confession to make. I love my mini-van. It’s a 2006 Honda Odyssey, the EX/LX. Almost the highest edition. The highest one had an automatic back hatch opener. It also had like 30 cupholders. Despite my extreme laziness regarding trunk-opening, I could not quite justify shelling out more money for these special features.

I love how it drives like a regular old car, the driver-side lumbar support, the cushy seats, the thirteen cupholders for eight people, the drop-down DVD screen, even the iPod player, which, at the time, could only be installed through the glove box. I even like the gentle chirruping noise it makes at you when you forget to turn off the headlights. I like the color: “silver green,” and how you can’t really tell it’s anything except silver unless it’s sitting next to a “silver blue” Odyssey.

But I mostly love how it can hold eight people,which means that all my kids and their friends fit neatly in the car, each seat-belted and safe, no one left behind.

When I was a kid, we had a Chevrolet Cavalier, 1982 or 1983ish. We drove it to Pennsylvania nonstop, in only three days, from San Diego. Three days. My dad would drive at night, my mom in the day, and sometimes my dad would drift to sleep while he was driving and my mom would shake him awake. Then he would pull over to the side of the freeway and we would sleep, me awakened by the thundering semis shaking the car. We didn’t even pull off onto an exit. Nope. Not dangerous at all.

That trip, while nausea-inducing and hot, accounted for the big chunk of our family togetherness time I experienced as a child. Me and my middle brother, huddled in the backseat, sleeping on a cot that unfolded onto the leg space as we careened coast to coast. Here’s what I remember about that car trip:

1. I was promised a silver charm for my bracelet from every stop. I got two. One from the Petrified Forest (a disappointing gathering of smallish rocks) and one from Andrew Jackson’s house. The only things I remember about Jackson’s house in Tennessee are the stiflingly humid heat, and the smell of fried chicken. 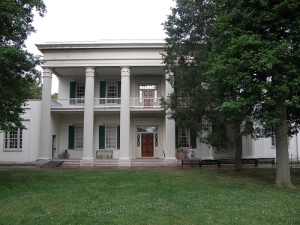 2. We pulled up to the Painted Desert, looked at it from the car, and continued on.

3. After we spent a few weeks in Pennsylvania with relatives, we were going to go to Washington D.C. We arrived in the evening, looked at the reflecting pond and the Lincoln Memorial. We got a reproduction of the Constitution on fake old paper. My brother and I desperately wanted to see the Smithsonian and all the other attractions. But my parents decided it wasn’t worth staying a night and we got on our way back to California. Maybe we were out of money, maybe they hated D.C., maybe they hated culture. Who knows? I still haven’t been back.

Around 1986 or 1987, unsurprisingly, the Cavalier died its first death. You see, my father’s method of car maintenance was to wait until the car quit working, then pour oil into it. I remember one time the car dying as he turned onto our street. “Get me some oil!” Dad roared. Someone ran into the garage for a quart and he poured it in, blood for a hemorrhaging patient.

This Cavalier died most spectacularly when my brother was 16 or so and a new driver, alone on what was probably one of his first solo runs. It burst aflame while he was driving, on Navajo Road in San Diego, not too far from the fire station. He ran all the way back home to get my dad. Meanwhile, the firemen apparently looked out their window. Firemen and broken car windows were involved. It really should have been in the paper. The car got fixed; I seem to remember that being caused by a defect, not the fact that there was no oil in it.

My dad decided it would be a good idea to get a second car, in case something should happen permanently to the first. My brother and I went to the Drew Ford dealership with him (we had to buy American).

The Ford Escort EXP was the car he was looking at. To my eyes it looked absolutely chic: a sporty economy car, two seats with a useless cargo space in the back where a backseat should be, automatic shift, lower roof line. Black. “It’s only two seats,” my dad said.

The salesman, an Ed McMahon clone with a glint behind his glasses, said, “Who cares? It’s the second car. Besides, it suits you!”

“Yay!” I cheered. Awesome. At last we were going to get a fantastic sports car.

“Too expensive.” My dad ran his hand over the car. I could see the love for the Escort building. “I don’t know.”

“We’ll take out the A/C,” the salesman said.

“Not the radio,” my dad said. “You gotta have the radio.”

They struck a deal. No power steering, no power brakes, no A/C, a cheap radio. They should have gone with the A/C and put a radio in later. Black car, southern California. Yes, A/C.

When my father turned the corner onto our street, my neighborhood friends were gathered on the street, where I had told them to be to witness the great coming of the Ford Escort EXP. “Look at that!”

“Sharp car, there!” a neighbor called out.

My mother was apoplectic. See, she forgot. She was the sane buyer in our family, the one no one listened to. “What you thinking?” she yelled. “Leasing? Two-seats?” But the deal had been done and the papers signed and there was nothing she could do.

My brother used the Cavalier until he decided to trade it in for a different car, with my father’s permission. A two-seat Fiero. I adored the Fiero. My brother took me to the Stadium to practice driving in it, slowly through the empty parking lot. Compared to the Escort, it was like driving a rocket. Sometimes, when he was home, he let me drive it to school. My husband, who was friends with my brother at the time, told me he told my brother to get a different, more practical car, not the Fiero.

But the Fiero only had two seats. Thus, the era of not being able to go places with my parents unless I was lying down illegally in the useless cargo space of the Escort began.

A few years later, while I was in college, my parents bought a new car. I got the Escort. And when it died, because, as my friend’s mom pointed out, Escorts were not made to last forever, I went to the Drew Ford dealer with my dad. By now, we had Special Customer status, which got us a sticker on the windshield for our return and maybe an extra cup of the coffee they kept around. Drew Ford is where the Aquarius Roller Rink used to be, and where I busted the bone out of my arm during a skate party in second grade. That mojo should have told me something. It did not. My experiences with the other cars should have told me something. They did not.

“How about this one?” my dad suggested, pointing to a huge black Thunderbird. “It’s got power.”

“Nah.” I had my eye on a red used Mustang. It was beautiful. It made my heart beat faster. That was all I cared about, beginning to end. This one had backseats, two tiny ones. At the time, I saw nothing wrong with procuring a too-expensive car with a stick shift I didn’t know how to drive. The salesman gave me a lesson. It was sporty and as impractical as I was. My father shrugged.

The salesman hesitated. He was a nice Middle Eastern man and either he was the savviest salesman ever or an unexpected voice of reason in this story. He said, “Well, you know, you shouldn’t get your dream car first off. You should work up to it.” I wondered why he was trying to talk me out of the car and put my foot down.

When I got home, my brother saw my new to me car. “You shouldn’t have gotten such an expensive car,” he said. His words surprised me. After all, I had real backseats. And the thing was, I didn’t know it was a mistake until he said so, right then. I guess I thought that’s how things were done. You saw a car you wanted, you bought it, come hell or high water or high interest loan.

So with the minivan, I broke the family curse of purchasing impractical vehicles. I embrace the practical. I love the practical. Besides, the Honda website says the Odyssey has “aggressive front and rear styling.” How styling is aggressive, I don’t know. But it’s aggressive, darn it. If I had a sports car, it would be maybe a third car. A minivan, a sedan for Cadillac, and then the sports car.

My minivan can carry everyone I want, and even people I don’t want, no problem. I can put luggage or paddleboards or skis on top of it. I can put down the back seats and carry bricks or a sofa if I want. Heck, I could even put a trailer hitch and haul a boat. Not that I have a boat. But I could if I wanted to.

And my kids, none of them, not even if they want to, will have to stay home because I got a car that was too small. I picture us one day driving across the country in it, if we ever move back to the mainland, and if we ship this car too. Maybe we’ll even go to the Smithsonian, which our kids know from NIGHT AT THE MUSEUM part two and therefore would be jazzed about. I’d even spring for a hotel for a night.