This Christmas was smaller than usual. I got by with only two rolls of paper and 1 sheet of free Humane Society gift tag stickers, the kind they send you hoping they’ll guilt you into a donation. Ha ha, suck it, Humane Society! I used your gift tags and didn’t send you a stinking dime!

This Christmas, I decided to level off with the novel: we don’t have extra money to be buying people crap they don’t really need. Or extra things, like trees and cards. We went down to a Charlie Brown tree, a small fir purchased at Foodland and decorated with a few odds and ends. I mean, who needs a huge real tree for $150? It would surely get ants all over it anyway. Yet I love Christmas decorations, especially lights. “As God is my witness,” I said, to no one in particular, “next year I will have lights outside! We will never not have lights again!”

And this, the crowning glory, the fireplace: 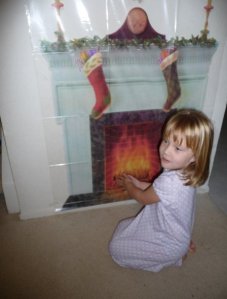 Now, being from San Diego, we’re not used to snow. But it’s been in the 50s and even 30s recently in San Diego. Here it remains a steady 80 to 87. I am still sweaty every day. I have only turned off our fans one time. One time! Since June. No wonder our electric bill is so high.

On the 23rd, in our efforts to have a non-traditional Xmas, we went to Hanauma Bay, where I witnessed the Best Exchange EVER!! There was a woman standing in front of us with her teen daughter; teen daughter loudly complained about how she was SUFFERING because she was at the beach; poor thing’s parents made her go to Hawaii. Her mother grew more and more embarrassed, but the mom appeared to be a typical upper middle class woman who probably forgot to parent her kid when she was little and is now flabbergasted at the ensuing brattiness.

Anyway, the lady in front of them turned around and said, “I am SORRY, but I am sick of listening to this. You listen to your mother and quit disrespecting her.” And then she swept away with her own two kids (who were well behaved).

Miss Teen had nothing to say.

Then I lost all sympathy for the woman because she tried to pretend she was local to get the discount. Evil! Bah. Humbug.

The water was super warm, 79, spoiled only by the tourists who had just watched the video telling them not to get on the coral reefs and so were sitting on the reefs or walking on them like fools. The last time we were there, the lifeguards yelled at people who did that. Today was so crowded, the lifeguards became downtrodden and stopped.

Today there were loads of fish, and I kept wondering how they tasted. Mmm, fresh fish! But you’re not allowed to take fish there. Oh well. I really need my husband to go spear-fishing and catch us some fish.