I just got back from a 5-day trip to the Bay Area of Northern California. It was a work/pleasure/work trip for us. Cadillac had to go audit a bunch of offices. Being overly ambitious, we visited about 25 over 3 1/2 work days, covering 1000 miles. Woot! But we did get to have dinner in Napa one night, play around in San Francisco, and see the inside of multiple Starbuckses.

This is the first blog entry from the trip. On Saturday, I gave a talk for Omega Nu at the Yolo Fliers Club near Sacramento (that’s right: YOLO: you only live once! is a real and actual county). Marsha Toy Engstrom, aka The Book Club Cheerleader, invited me. I’d met her at Pulpwood Queens. Omega Nu raises money for a scholarship fund and other community organizations. So, I got to help 12 kids go to college! There were 130 people, and the theme was How to Be an American Housewife. It was lovely.

A friend asked me today if it’s hard to speak in front of that many people. The answer is no. I think it’s easier than speaking in front of a small group, because you really see the individual faces if there’s a small group, whereas a large group you don’t. So I think it’s actually easier for me to talk to a big group, oddly enough. 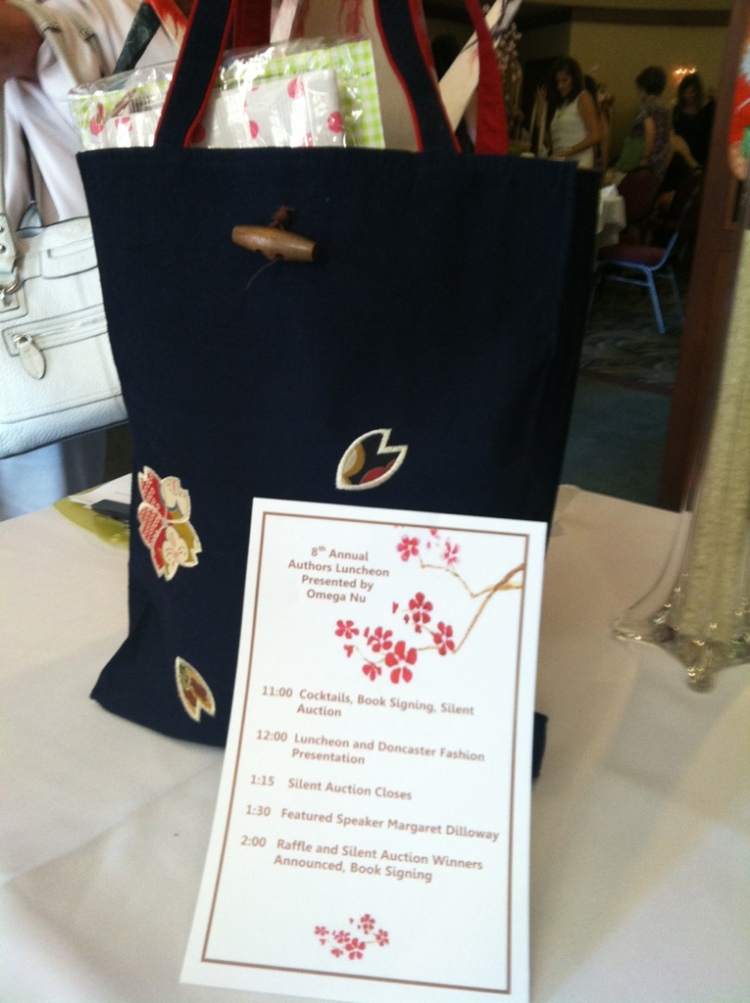 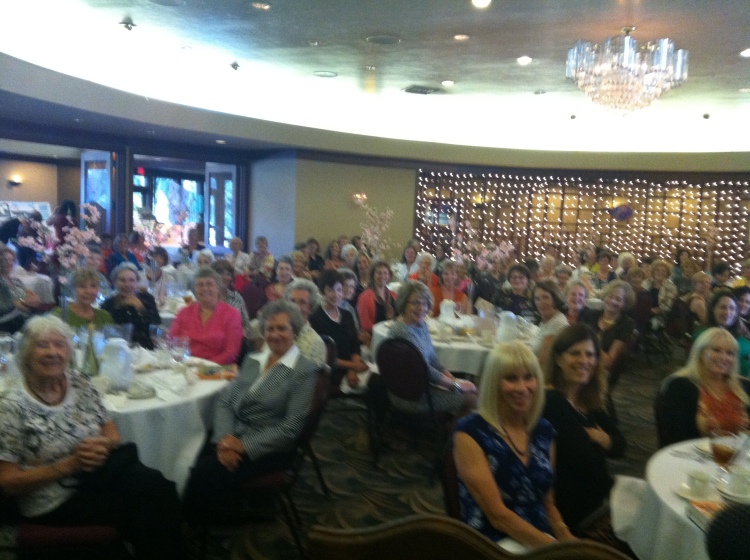 One of the members, Betsy, wrote to me a while back telling me how many parallels there were between my character’s life and her mom’s life– really, between my mom and her mom. Like my mother, Betsy’s mom, Fumie, is from Kumamoto, Japan, and, get this, born in the very same year as my mother. Betsy showed me her copy of Housewife and its zillion Post-It sticking out and all its notations, telling me it’d opened up a lot of conversations between her and her mom. For example, she’d thought her mother was mostly unaffected by the war– but she asked her mom about getting strafed and her mom said that happened all the time. The Daily Democrat featured an article about it(link goes to the cached version, otherwise you have to look in the archives).

Betsy had her mom join us for the luncheon.

Fumie walked into the room and greeted me. I was floored by how much she sounded and looked like my mother and got tears in my eyes. She immediately gave me a hug, telling me she was so moved by my book and so proud of me.

Betsy gave me some watercolor notecards she brought back from Kumamoto depicting scene from the city, and a furoshiki, a piece of cloth used as wrapping paper– in this case, folded into a beautiful kimono I don’t want to ever unfold. Fumie and her club made the origami girl bookmarks– instead of knitting, they make origami and sell these for fundraisers. Super cute!

I saw Fumie in the powder room later and she stopped and said, “I don’t have anything for you, but I want to give you this bag.” I demurred, but she insisted. She literally gave me the bag she carried on her person. It was made by one of her friends, hand embroidered. So pretty!

Marsha gifted me these fun gloves.

The talk went well, lots of books were sold (thanks to The Avid Reader in Davis), and all in all it was a fun afternoon. Even Cadillac, who suspected he might not have such a great time as only one other man was there, enjoyed himself.