Today is our 14th wedding anniversary. 14 years ago today, Cadillac and I married in a super secret ceremony in the home of a Tacoma justice of the peace. The witnesses were two people from his Army squad: a guy whose name I can’t remember, and his Sergeant, who gave us the book, The Five Love Languages.

It sounds dramatic to say it was a secret wedding. We wanted to get married in San Diego, with a properly witnessed, family-and-friend attended wedding. Cadillac could not leave due to his Army commitments; everyone got the same time off, and his wouldn’t happen until the next summer. As a practical matter, if we were married, we would get the military benefits, like housing allowance and health care, that we needed.

So we told our parents and we got married.

The proper wedding, white dress and all, was held the next year in July.

There are some photos from this secret wedding day, but they didn’t turn out. They are half black, like the shutter had a crack, which it probably did in the old camera.

I was a bit afraid this portended some OMEN of dark nature, but it didn’t. The other wedding pics turned out great.

It turns out, we have THREE anniversaries. The one in October, the one in July, and one in March that occurred three years later, when we got the marriage sacrament in church.

Anyway, despite the fact that we basically ignored all advice columnists and mothers on how to pursue serious relationships (fast, on the heels of another relationship, etc) it’s turned out well.

I try not to talk much about my husband in terms of what he does for me. It sounds like bragging. I mean, he annoys me sometimes, and I annoy him, but for the most part, he’s not like most husbands I’ve heard of. So ’cause it’s a special day, let me talk about what he does for a second.

This is how he takes care of me: He makes my coffee every day, though he never has time to drink it himself– I just have to press the button. If he has time, he makes my eggs, and always makes them on the weekend, in bed, if I want. When I’m sick, I’m a huge baby– I know that the stereotype is that men are the babies, but it’s the other way around– so he orders me to bed and brings me soup. He stays up late doing laundry, and he remembers to separate my delicates. He drives the kids to as many things as he can, and when they were babies, he was the one who got up with them. He gets up with them these days, if they get sick in the middle of the night. He gets up with ME if I get sick in the middle of the night. (Right now you might be asking yourself what he gets out of this deal. So the best thing you can do is buy one million [holds pinky up to mouth like Dr. Evil] copies of my books so he doesn’t have to work so hard! Do it for him, not for me.)

What we like most is spending time together. Also, we are broke. Today, he took the day off, and we went on a hike to a place neither of us had been. 40 minutes of uphill. No switchbacks, no leveling out. Just up and up. I thought I was going to die and made sure he could tell the helicopter where to pick up my body. But I did not die, because his arm was around me, shoving me up that mountain. (It was a peak across from Mt. Fortuna; if we took a fork we would have gone over to Mt. Fortuna) 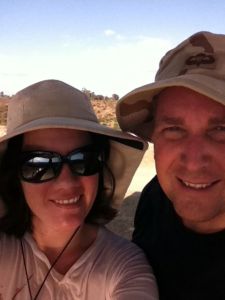 And then we went to Sea World, where we got to ride the sky ride for the first time together (no kids), and watched some dolphins playing with various balls, including a big exercise balls. They’d hit the balls out of the enclosure and people threw them back in. One dolphin hit the ball out of the water right at me while I was messing with my phone (trying to take photos), and I ducked, knowing Cadillac was going to catch it, and the best thing I could do was get out of the way.