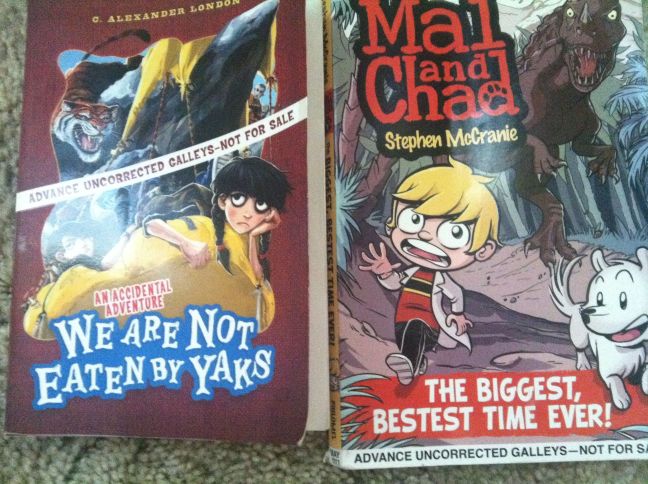 Okay, this post isn’t really about writing, but about something closely related: reading.

Today I read James Patterson‘s article, “How to get your kid to be a fanatic reader.” There’s a section about getting boys to read.

I think Patterson has a great point– boys should read what appeals to them. About twelve years ago, when my husband’s nephew was about 13, he came to live with us. He hated reading. I finally found a book for him, HATCHET, by Gary Paulsen. He read it and said it was the first book he enjoyed. Unfortunately, he was already 13, and I don’t think he went on to be a huge reader after that.

My son is 9, and though we read to him every night as a youngster, he was a somewhat reluctant reader until last year. He only read easy chapter books and was intimidated by longer works. I think the turnaround came when I went to the American Library Association and picked up these two books: 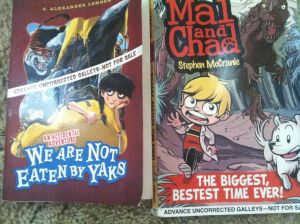 MAD AND CHAD is a comic book with a great funny story. WE ARE NOT EATEN BY YAKS is about these two kids who are the couch potato offspring of two adventurers. When their mom goes missing, the kids have to employ all the skills they learned while watching reality TV to go save them. Well, that’s just like his sister and him! And Cadillac and I are always telling the kids to come out adventuring. Well, our adventures are at the zoo, not other countries usually, but still.

Son loved WE ARE NOT EATEN BY YAKS so much he took it to school. The teacher read it to the class. Everyone loved it.

Ever since then, he’s been reading a lot of books. He actually reads really quickly, so fast that sometimes I think he hasn’t read it, but he always knows the answers when I ask him about the plot.

I decided to take some photos of my son’s bookshelf and recommend some books myself.

Here are some library books.

FROM THE MIXED UP FILES OF MRS. BASIL E. FRANKWEILER. I loved this book, and so did Eldest. Son will start reading tonight.

SANTA DOG- Son said it was too sad, so he didn’t finish.

THE FANTASTIC MR. FOX and THE TWITS. Can’t go wrong with Roald Dahl. Son was giggling over these as he read at bedtime. 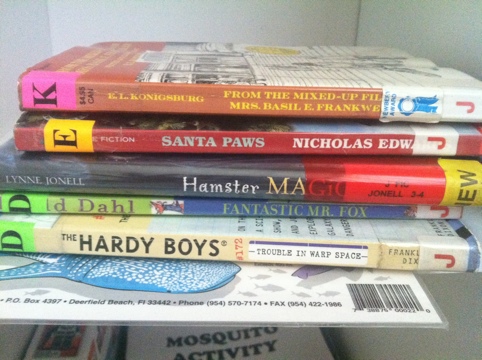 At a garage sale, we picked up all these GOOSEBUMP books for a song. It was the end of the day and the boy said his sister sure wasn’t gonna read them. They’re gory and icky and full of monsters, and my son loves them. 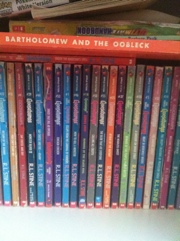 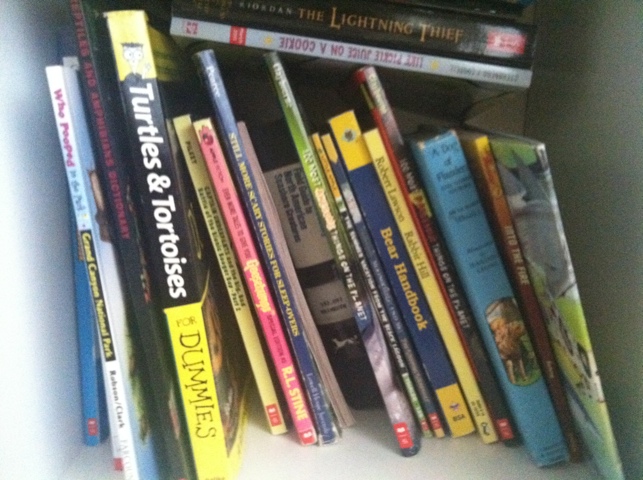 Here are some books I remember getting from my older brother, so I know either gender would enjoy them:

I hope this list gives you some ideas and a place to start!