My kids occasionally save up their allowances (or don’t save them) and buy completely useless things.  I always want to yell (and usuall do), “Please, save your money!  This is junk,” but of course they don’t listen, just as I never listened when my mom advised me that it wouldn’t be a bad idea to not buy so many She-Ras or Barbies.

One of the girls’ current favorites are Squinkies. These are pencil toppers (but not erasers) that come in plastic bubbles which inexplicably must be saved. Needless to say, Squinkies end up everywhere except where they belong. Eventually they will all find their way into my vacuum canister.

I began thinking about other toys I’ve disliked–no, hated– in the nearly 12 years I’ve been a mom. Some highlights:

Boo-Bah
If you never saw the trippy PBS show about aliens who come down in eggs to dance and sing, you are missing one good acid trip. My son was OBSESSED with Boo-bahs when he was around 3, and one Christmas, Santa brought him one in every color. Then there were two extras obtained from elsewhere and you had something like this (only with more Boo-bahs) and you will know my personal Hell, which lasted about six months until he left them in the backyard during a rainstorm:

Yano
One Christmas, my dad asked what the kids wanted. I said, “Anything but that horrible new Yano toy. PLEASE don’t get them that.”

So that’s what they got.

I hated that thing. Its rubbery face and eerie voice made me want to smash it with a bat. Yano lived at my dad’s house.
I just did a YouTube search and most of the Yano videos feature his creepiness, so you know I’m not alone.

Bratz
The drawn on eyebrows, the frosty white lipstick, the hoochie hypersexual clothes. If you wanted to grow up to be a gang girlfriend or perhaps a music video vixen, these were the dolls for you. As soon as these dolls came out, I banned them from the house.

Of course, a few made their way in, purchased for birthdays by various friends.

The site where this image comes from has an entertaining post about their evil-ness.

Worse are the Baby Bratz, which thankfully never found their way in, or else we would have to throw holy water on them. 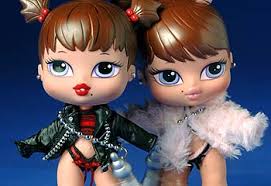 And who could forget the Flying Monkey? My brother, who obviously hates us, sent us a BOX of these one Christmas. A box. Actually, Cadillac loved them, too, and hordes of flying monkeys were launching simultaneous attacks until mysteriously, one by one, they disappeared.

That’s all the trauma I can withstand for now.

6 thoughts on “Toys I Have Hated”