Last Saturday, my family and about 100,000 other spectators crammed around the harbor to see the largest flyover since WWII.

Traffic was pretty bad, so I amused myself by taking photos with my new phone (you can see yourself taking a picture! Lenses on both sides) and using the Photoshop application. Ahh, gauzy light. Looks practically like a Mariah Carey album cover.

We didn’t bother attempting to get onto North Island, but we did think we could make it at Cabrillo National Monument, where the light house is.

No such luck. The lots there were full despite having to pay to get in.

Instead, we parked by Fort Rosecrans cemetery. My mother’s ashes are here, as she was the wife of a Navy vet herself. It’s a beautiful military graveyard overlooking the water.

We carefully walked through the headstones down to the bottom and waited for the show.

We were right across from North Island. There were sea lions laying out on docks below. The kids got a kick out of seeing those with the binoculars. 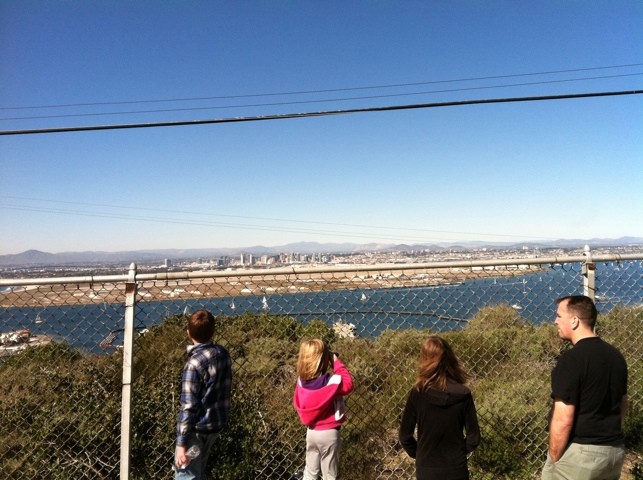 At last, the show began. I had no high-powered camera to take photos.

As the planes began to appear, I thought of my mother, her ashes right across the road, wondering which of these types of planes had been strafing her. If you read How to Be an American Housewife, you’ll recall that scene, based on an incident my mother related to me: the American pilots strafing her and laughing.

The next day, I read this quote in the newspaper: “I remember what our planes were like, but I remember more about the sounds of the Japanese bombers,’’ said the 87-year-old Ruffato, who was stationed aboard the Utah when the attack occurred. “The planes were really loud. … They were so close you could see the pilots laughing at us.’’

On both sides, you had pilots laughing at the people below as they shot at them.

There were people all around, plane aficionados, pointing out the various aspects of each plane and what its role was. But these aren’t just hobby planes, these are the real deal that went out and killed people. For freedom, yes, but still a sad event.

It seemed fitting that we watched it from among the graves of veterans. Many of them from that very war. And my mother.