I used to be very against outlining books– novels– because I thought they had to be PURE and free-flowing and not sticking to any formula. But then last year, at the Hawaii Writer’s Conference, I attended bestselling author William Bernhardt’s outlining seminar. He said he couldn’t teach us the poetry of writing, but he could teach us the structure. (Yes, this was one year ago and yes, I am just now writing a blog about it.)

The structure are the bones on which the flesh hangs. It may seem counter-intuitive for a creative person to do a technical exercise, but it makes So. Much. Sense.

I will share with you this method of outlining as I understood it, minus Bernhardt’s entertaining delivery and graphics. (By the way, Bernhardt also gives workshops).

I then used this method to help me write my second novel. Results: It took about six weeks to write a draft of the novel I felt comfortable showing my agent (working full-time, pretty much). Granted, I’d been thinking about the idea and characters for about a year, so it was ready to flow.

60 Scenes in a Novel

Most novels have about 60 scenes and three acts (like a screenplay). The acts are a “series of sequences that culminate in a major turning point in a character’s life.” I wrote that down because Bernhardt said it twice.

1. Get 60 index cards out.
2. Write out one scene per card. Include notes for  subplots, when characters are introduced, whose Point of View it is, etc.
3. Arrange them in an order of deepening intensity.

As I arranged, I paid attention to the following:

The Micro of Scene Work

Each scene is an event that changes the character’s situation in a meaningful way.

If the scene does not meet these criteria, take it out.

Then I decided where the following points are and marked them on the cards(or, if I didn’t have them, I created them):

Also: You are allowed to break all the rules. 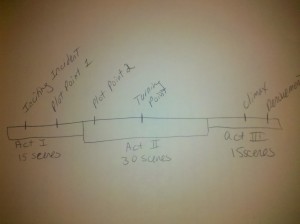 These are things I understood instinctively, but to have them explained made the proverbial light bulb come on.

Mind you, outlining won’t make your characters automatically interesting or improve your writing style. It won’t allow you to force bits of plot in just because it’s convenient or gets your character to the next plot point.

But it does force you to keep things simple, and focus only on important points of theme and plot.

16 thoughts on “How to Outline a Novel: 60 Index Cards Method”