My brother scanned a bunch of old family slides and sent them to me. Most are countless pics of zebras, old-school Disneyland, and my older brothers (there are maybe two existing baby pics of me) but these held particular interest to me: 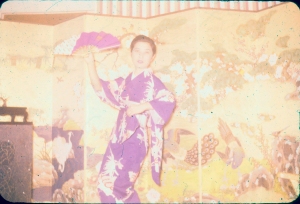 This pic of my mom, posing with a fan, in front of this screen that they shipped from Japan to the U.S. and transported all over creation with them. I think my mom was about 28 at the time this was taken.  In every photo we have of her, she posed like a fashion model.

She had me at age 42.  After my birth, there weren’t many pictures. Not just not of me. Of anything.  I think they stopped doing anything they thought worthy of taking pictures of.

When I look at these photos, I think: “Hey, these are mostly of my oldest brother,” and “Boy, my parents sure did a lot of stuff before I was born. I wonder why I never got to go camping or go to all these amusement parks or the beach all the time.”  Also, “This family looks a lot happier than the family I remember having.”

In one photo, there is a wooden lawn chair settee pictured, taken years before I was born. I remember the wooden set well. It was our family room furniture when I was little.

Yes, wooden furniture, after being outside for over 4 years, became our indoor furniture. I was too young to know, but this must have indicated how poor we had become. Perhaps that was why no one took pictures anymore.

A certain amount of melancholy therefore accompanies my picture-looking. I know that my own children, young as they are, love looking at photos of themselves when they were little. They love it more than anything, except perhaps the accompanying stories, which they beg me to retell.  “I remember that Christmas,” they say, “when Ethan got six Boo-Bahs and he made them all go off at once.”

(If you don’t know BooBah, it was a trippy PBS show, TRIPPIER THAN TELETUBBIES, where these weird things came to Earth in white pods. Ethan had six of these one Christmas. I believe there were only four characters, which means that he got duplicates. Imagine these all being set off simultaneously. Now you know why I’m the way I am.)

Anyway, this silk screen was made for my parents in Japan from an antique print.  It’s handpainted.  I could not take it to Hawaii, and it bore damage from all its moves and from being stored in dusty garages.  My friend has it in her house now and I believe has shown it more TLC than it had gotten in 50 years.

When I was 15, my parents wanted me to wear a kimono and pose in front of the fan.  My dad had these big, hot, yellow lights that he used to wash out everything.  I wore a different kimono and merely knelt, having no dance experience. 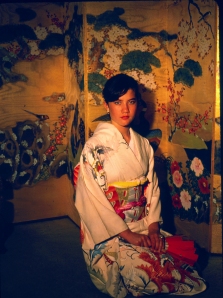 If my eyes appear blue, it’s because I wore blue contacts.  I used to hate having brown eyes until one day I looked at them in sunlight and they glowed like the Twilight vampire eyes after they eat.  Prior to that point, I had only seen them in the semi-dark of the unnatural light of the bathroom mirror, and they appeared muddy to me.

The two things I remember about this photo: I was hot and I was annoyed at having my photo taken.  My parents said I cried every time I got my photo taken, thus they never took my photo. As a parent, I have to say that my son cried when I POSED him for a photo, so I stopped posing him.  I still have lots of pics of my son.  I think it was more of an issue of control.

But the craziest thing I found on the slideshow was this photo of the statue from the Nagasaki Peace Park.  You see, I wrote of it in my novel.  Many months after I wrote about it, I found that my parents had taken a photo of the statue.  It appears they took it shortly after it was installed.

3 thoughts on “My Mother, Myself, Boo Bah and Nagasaki”