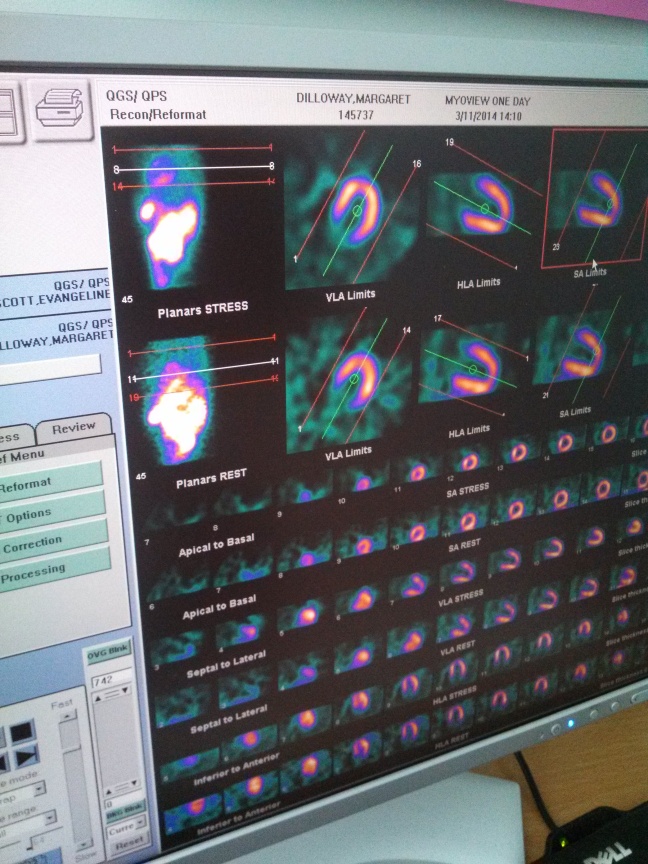 2014: In which Margaret Dilloway is Rebuilt. Better, Stronger, Faster

If you follow me on Facebook, you’ll notice I’ve had a rather unfortunate spate of having to go see doctors lately. Well, hopefully it will all be fortunate in the end; in the meantime, it’s just visit after visit with new visits added (dog spraining wrist, for example). I fear my doctors think I’m a hypochondriac. The truth is, I’ve had a few minor problems, that have only now worsened enough for me to do something about them. You know how it is. You’re too busy to take care of things.

I had an endoscopy to see if I have Celiac’s Disease and to address stomach pain and reflux, for which I took a drug called Dexilant, which had stopped working so well. The doc found pretty significant reflux that affects both passageways, larynx and esphogeal (so that’s why I sound hoarse when I sing! Not that I was ever fabulous), and generalized tummy irritation.

During this procedure, my heart was doing something wonky. PVCs, they’re called, on the EKG (premature ventricular contractions) which they also called extra heartbeats. It freaked out my GI doc, who used to be a cardiologist, and during my groggy recovery period right after the endoscopy (luckily, husband was there listening), he told me to make an appointment with the heart doc.

The doctors all got very excited and nervous about this, because there’s this heart thing in my family that I potentially will develop. It’s called noncompaction cardiomyopathy, and basically your heart walls are spongy instead of smooth. Sometimes this morphs into an irregular heartbeat, which causes your heart to enlarge and not work well. It’s what ultimately killed my mother and her sister, so every year I get an echocardiogram to make sure they catch any changes very early, and of course there are other treatment options available now that were not available 20+ years ago.

I’d been noticing an irregular heartbeat sometimes and a really low pulse. Usually 44, every time I go into the doctor’s office. Now, I’d say I’m in moderately good shape—but there’s no WAY my pulse should be that low. That’s like endurance athlete low.

The cardiologist said that the monitor could only pick up every other beat if my heart was doing an extra beat, hence on the EKGs my heartrate was around 88 instead. He ordered a nuclear stress test, a Holter monitor (which you wear for 24 hours) and another echo.

The GI doc said he found no evidence of celiac’s (he said I have wheat intolerance and to continue avoiding it) but he was still worried about some other symptoms I’d been having and wants to do a colonoscopy to see if I have colitis or cancer or precancer or whatever. Yay. (waves pompoms). Sounds like fun. I mean, I know you’re supposed to start having them at some point, but I was hoping to wait until the minimum recommended age. Oh well. At least my insides will be spic n span. I’m glad they’re being thorough, because it would suck if I found out there was something really wrong with me a few months down the road.

During this time, I also finally got a referral approved to go see an oral surgeon about my jaw. I was born with a crooked mouth, as you might have noticed from the pictures or video of me. I don’t know if it’s due to nerve damage (which would be called asymmetrical crying facies, I think, based on my highly accurate Google research) or if it’s entirely bone-related, but basically my jaw has gotten more crooked over the years, pushed by the overcompensating muscles in my face. This led to the total demise of the cartilage in the right side of my jaw, which, as you can imagine, is not pleasant. I’ve had ear pain for years and various other issues that can be traced back to the jaw (my face actually starts aching if I speak for too long—by too long, I mean for more than 5 minutes, the time it takes to read a picture book. Really. It’s annoying). Some teeth are also hitting soft tissue and I keep getting cuts in my mouth. Finally, I went to see an orthodontist (once, I had these “braces” which were actually removable braces attached to retainers, which did not address anything structural) and he found out about the missing cartilage when he did an X-ray, and also that the jaws are different lengths, and told me I had to address my jaw before he did anything. So I am actually excited to see this specialist. (And if you ask me why I’m not smiling, well, now you know. It hurts.)

Back to the heart. I went to the cardiologist’s to get some tests. The most interesting was the nuclear test, in which they shot some radioactive substance into my veins. Then I had to wait for 20 minutes, hoping to turn into the Hulk. Sadly, nothing happened, and then I had to lie down and have my heart scanned by a machine for 12 minutes, during which time I fell asleep, because the nurse gave me a warm blanket, and what else is there to do?

After that, I got on a treadmill in a room where the nurses played Good Cop, Bad Cop.

“Yep,” I’d say. At first, boldly. Bring it on, I thought. Good Cop stood right by me, obviously concerned I’d fall off the machine.

“MORE!” Bad Cop yelled. He amped it up, again and again. “Just a bit faster.”

“Not too much,” Good Cop said.

“I can’t not run,” I said. I guess I could have done a fast walk, but it was easier to run. He made the angle mountain-steep. It seemed to go on forever. My lungs felt like they were going to burst. “Ungh,” I said.

Good Cop put her hands on my arm. “Do you want to stop, hon?”

“Stop, she wants to get off,” Good Cop shouted.

“I think you should turn it off,” Good Cop said.

“Yeah, yeah, I want to stop,” I said, and abruptly Bad Cop switched off the machine. I was actually expecting to do a cool down walk, so this, combined with the fact they don’t want you to eat prior, just about knocked me out. My ears rang, and then my hearing went muffled. I had to bend over, fearing I’d pass out. Good Cop felt my arms and pronounced them clammy and then I felt sick, so I was made to lie down. Good Cop looked at Bad Cop accusingly. “She needs to rest.”

I was convinced that Bad Cop was like the Dad who thought his kids could do the non-bunny slope on the first ski run, and Good Cop was the worrying mom who knew they’d crash.

I had to take a break of 30-40 minutes, and was allowed coffee and food, then had to lie in the machine again. I got to see my heart in glorious Technicolor.

The images taken before and after the treadmill (the first two rows of large pics) are supposed to look the same when you compare them. If there is a blockage or something off, the color patterns will be different. These look pretty much the same.

The Holter is an EKG machine you wear for 24 hours. I had adhesive on me for 2 weeks—it just would not scrub off. I tried telling people I’d been in an accident and was now the Bionic Woman, but only one believed me. I was also afraid someone would think I was wearing a bomb, but nothing dramatic happened, and most people didn’t look twice at all the wires.

Anyway, the ultimate result of everything was that my heart is great. Better than normal. In fact, the Holter showed that I had fewer PVCs than I did 4 years ago, when I had the test before. Any discomfort I had during the nuclear stress test was due to my cardiovascular shape, which can be conditioned. Admittedly, I haven’t always pushed myself that hard, always afraid that my heart will rebel. But now I don’t have to worry. Drat. The cardiologist said that nobody knew what caused these irregular heartbeats, but that they were not clinically significant.

Then the cardiologist and I had a discussion about the meds that I take. Three of them, one for allergies, can actually cause some irregular heartbeats. The Dexilant, for example, can lower magnesium, which can cause this. Nobody checked my magnesium. Luckily, I got switched off of Dexilant already (which can also cause calcium loss, if taken for too long).

Now I think that these medications are all actually irritating my stomach and that I need to stop taking them as much as possible, which will hopefully eliminate a lot of the acid issues and the irregular heartbeats. I’ve always had a sensitive stomach, and whether that’s due to colitis, or if it’s worsened in my adulthood because of meds, remains to be seen. It may just be a case of one doctor prescribing a medication for a symptom caused by another medication.

So, by the end of this year, I fully expect to be a highly functioning machine who will still hopefully be able to have coffee and alcohol, in moderation. The other possibility is that stopping coffee and alcohol completely will just cure me of everything. But let’s hope for the best.