My big trip to Tejas was this past weekend, and the Pulpwood Queens Girlfriends’ Weekend proved to be the fun time that was promised. Kathy Patrick, its founder and organizer, truly has vision that Cannot Be Stopped.

I wish I had some juicy author-gossip stories to tell, but there are none because everyone was nice, friendly, supportive, and generous. Come on, you authors! You’re not giving me very scandalous material.

Girlfriends’ Weekend was held in Jefferson, which is about an hour or so away from Shreveport, and 3.5 hrs or less from Dallas.

The last time I was in Texas, I was ten and my family was driving through at breakneck speed to get to Pennsylvania in three days (which we did). So I had no idea what to expect.

It was cold, 32 degrees or so. Maybe 34. Now, Little Girl believes if the sky is blue and the sun is shining, it is a skirt-wearing day. Nine times out of ten in San Diego, sun shining means at least 65 degrees. What a reality check that would have been for her.

Jefferson, billed as The Most Haunted Small Town in America, looks like Main Street USA in Disneyland, combined with the New Orleans quarters (yes, I get all my architectural references from Disneyland, but what can you expect from a Southern Californian?). Thus the wrought iron details.

And I saw 4 gazebos, which is a lot, for me. Cadillac promises he will Build a Gazebo for me as soon as we own a house with enough room for one. (So what if he might have made that under duress?) 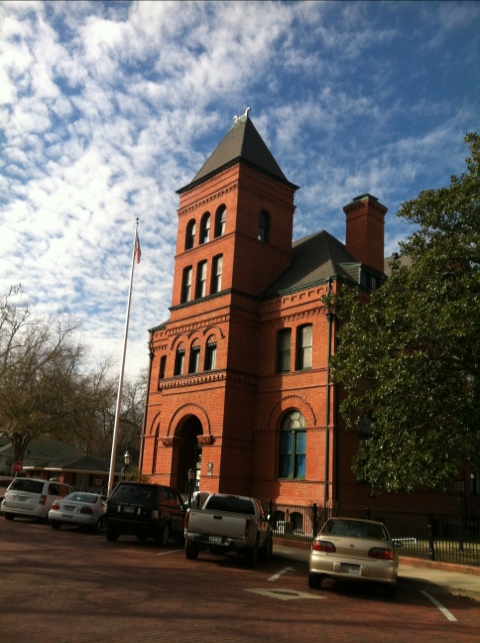 The first night was the Clown Alley author dinner, wherein we dressed like clowns and served BBQ dinner to the patrons. Here I made an important discovery: I could totally make it as a server. Or an expediter. That’s my fallback career.

Here I am with authors Karen Harrington (pink wig) and Caroline Leavitt (who has the most amazing, inspiring Stick to It story ever, with the success of PICTURES OF YOU, her 9th novel, I do believe).

And here are all the authors together:

About 400 women (and a few brave men) came to this event, plus, all told, I think 50 authors (some came along later).

The next day, I had a little time to relax on the porch.

After my panel, we headed over to the Best Hamburger Place in East Texas. It’s covered in signed dollar bills. I wondered if you could rob the place, but the bills would be easy to trace.

I kept thinking there was a strange-haired man behind the counter. Nope, just Elvis. 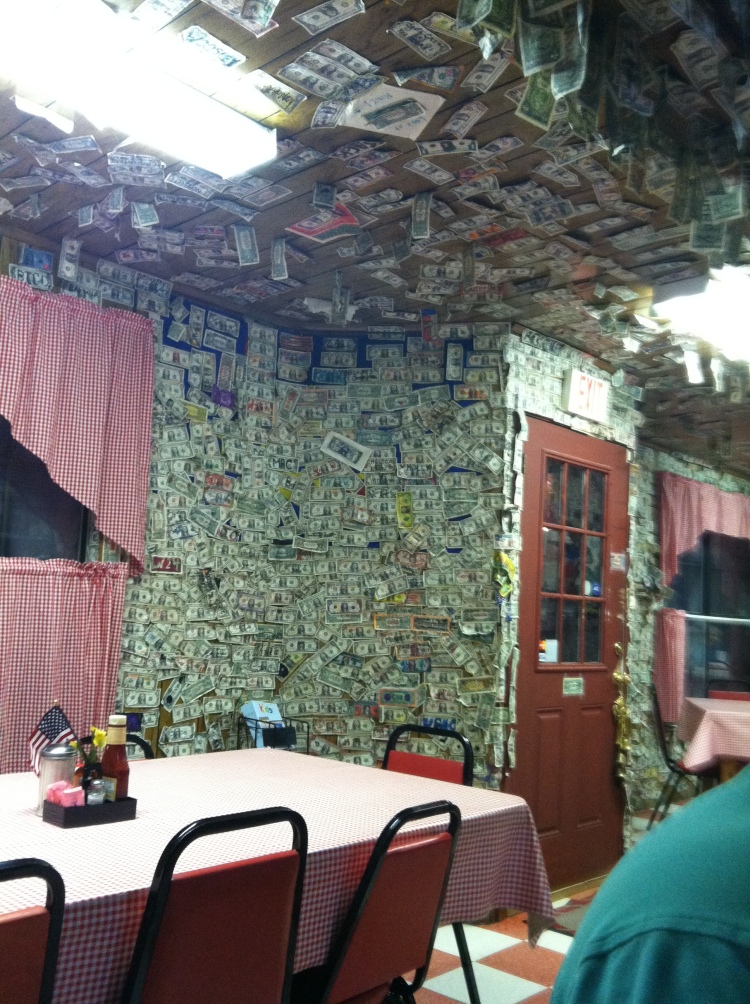 Then it was time for the Pretty in Pink bash. Here I am with authors Marcia Fine and Sarah Jio. I have to tell you two things about Sarah: she travels with her baby (and hubby, to help) therefore deserves a special Author Mommy Commendation Medal; and her latest, The Bungalow, is SOOO freaking good! I read it on the flight home. Totally escapist, tragic, romantic. Who doesn’t want to read about Bora Bora during the dead of winter, anyway?

And here I am with authors Eleanor Brown, Meg Waite Clayton, and Karen Harrington (Meg and Karen and I were on a panel). And that is TOTALLY Eleanor’s real hair! No, she had a couple of different wigs with her.

Also: I am wearing the dress my friend Megan gave me, which she wore to her senior prom in 1988. Because I am a *bit* bigger than the average high school senior, I had to let it out. The seamstress was going to charge $60 for this (a tiny Thai seamstress who clucked and moaned at how many inches she had to let it out because I am Monstrously Large, which granted she did not voice in words but through her sighs and shakings of head), but I went all Molly Ringwald on it and added panels myself. And it didn’t burst open, so it was a success. Those pearls are from the swapmeet.

Here’s some lovely sherbet/7-Up punch which some spiked with Grey Goose. 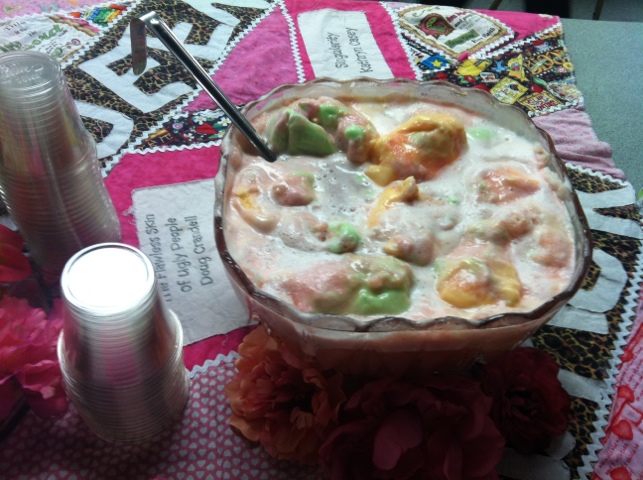 After prom, a bunch of people went to the local bar, despite there being talk of Real Cowboys there who might not take a liking to a bunch of sissified author-folk walking in in prom dresses.

Not one of those locals blinked an eye.

There was karaoke going on, which we all thought was recorded music until we saw that there was a stage in the back. Those Jeffersonians are good singers! Two of the locals sat with us and one, whilst reaching to shake my hand, spilled beer all over my prom dress. Leading my friend Julie to joke, as we drove home, “Look at you, coming home with beer all over your prom dress after midnight.” Just like prom, eh? 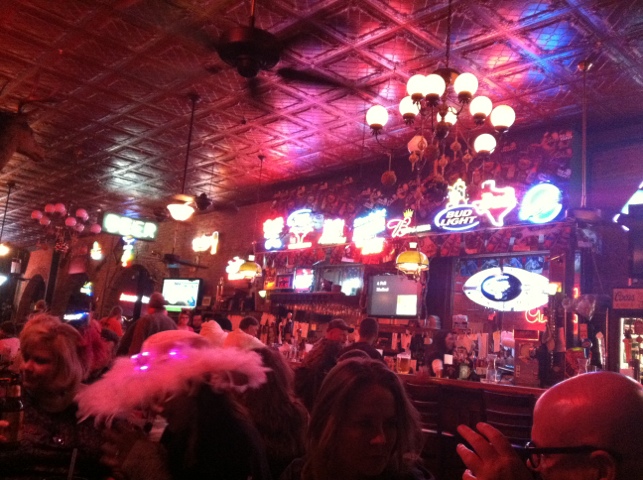 The next night, we ate a buffet at the Excelsior Hotel, which I am sure must be haunted in some way and has a beautiful dining room. They had us pay at the front, get a playing card, and put the playing card into a basket as we walked in.

Then it was time for the Great Big Ball of Hair. Book clubs dressed their tables in themes and also dressed up together. It was totally impressive.

Here’s me and Julie Kibler and Eleanor, who was being a tattoo artist and wearing another wig.

Then we got up bright and early the next day and went home, jiggety jig. The cat liked the beery dress.

So what did Cadillac do during all this time? Answer: Pretty Much Nothing, hereafter known as the acronym PMN, which is good. He drove us to and from the convention center and watched football and read books.

Also, I just noticed most of the pictures I took (on my iPhone) are totally crooked but did not appear to be whilst taking them. I guess I’m imbalanced!