I’m not the biggest fan of roller coasters there ever was, but I’ve been known to enjoy them occasionally. When I was a youngster, there were a few that I was afraid to go on. Mostly because my parents took me on Space Mountain when I was about 3. I don’t even think I was tall enough, and I spent the entire time feeling like I was about to fall out. Every other time we went, I rode all the rides because my older brother did.

Anyway, my kiddos hate roller coasters far more than I ever did. The last time we went to Disneyland, more than two years ago, they freaked out about Thunder Mountain. They refused to ride the Matterhorn. They went on Pirates kicking and screaming, afraid of the two shallow drops. Splash Mountain they refused outright.  Little Girl cried in every line because she was scared. (The boy and Little Girl have always cried at Disneyland; I show them photos of themselves crying and they deny it was them.  “That is not me. I never cried,” they both say.)

Yet they have all BEGGED to go to Disney since we moved back from Hawaii, so they can go on Small World a dozen times while Cadillac and I take coffee to the veins from boredom.  Afterwards, they claim they LOVE the little rides, and looking at all the Disney stuff, and seeing the Disney characters.  They just don’t want to go on any real rides.

Because they are all so opposed to the rides, they form an unbreakable bond, three obstinate kids against two adults.  Drat!  Outnumbered. There’s no older brother to tell them to get on the ride.

Anyway, with all this still in our minds, we decided not to go to Disney just yet. Also, it’s hella expensive, and I’d rather buy new furniture than shell out that much money for tears and gnashing of teeth.

Lest we sound like mean parents who disrespect their children’s personalities, let me tell you something. These kids do virtually nothing unless we force them. They suffer from inertia. They would be perfectly happy to live life on the couch, content to let others live real life. My mother used to say if you sat too long, you’d lose your legs, like the Japanese Daruma folk tale.

But whenever we do make them try an activity, they generally like it. Bike riding? Terrified, now love it. Snorkeling? Same. Trying strange foods? Yep; now my son adores octopus sushi, and ate friend worms at a bug fair last week. They simply have an aversion to doing new things. (When they’re with more adventurous friends, I’ve found, the kids are 110% more adventurous, to try to keep pace.)

Thus we continue our quest to push our kids slightly outside of their comfort zones. We decided to try out Legoland. We had “kids get in free” coupons and I wanted Apple Fries. That’s right, I was willing to go to get me some Apple Fries.  I didn’t get to go to the fair this year, so I didn’t get all the weird fried food.  Apple Fries are Granny Smiths, fried and coated with sugar and cinnamon.  They taste like sour churros, and come with vanilla whipped cream.

Anyway, Legoland is the land of coasters that don’t go so fast, and slower rides. Just their speed, yes?

The first “big” ride we went on was a plane ride. The planes hold two, and go up and down with a joystick, while going in a slow circle. It’s a slower version of Dumbo. Little Girl started crying. “I’m not going! I don’t like it!” So Cadillac stayed behind with her. I shouted, “I’m not taking her to Disneyland if she won’t try this!” and she ran back to me to get in line. Then, of course, she loved it.

We made sure to take a photo of the kids locked up. We have a pic of the older two, age 2 and 4, in the same one.

We then tried out a Dino Coaster, which is a pretty slow coaster. I mean, Cadillac drives crazier than the coaster. Not really, but that’s what we told the kids.

The boy psyched himself out by making himself hyperventilate. Eldest didn’t help. She complained of a stomach ache as we boarded. “This was a bad idea!” she yelled as the cars took off. I feared she’d barf on me, but figured it would probably fly backwards. Of course, her yelling set the other two off, and everyone became abruptly terrified.

Afterward, Eldest remarked that her stomach had been settled by the ride. The boy said he hadn’t actually been scared at ALL and it was great. Little Girl admitted it had been fun. “Do you want to go again?” Cadillac asked. They all said no.

Later, I waited for them to get off a helicopter ride, and a man, a woman, and a wailing little girl walked by. “What happened? Why is she crying?” asked the mother.

“She’s upset because she wants to go on a fast ride, but we’re doing the slow one first,” the dad answered.

“Want to switch kids for a while?” I called out. Not really. But thought about it.

At least I got my Apple Fries. 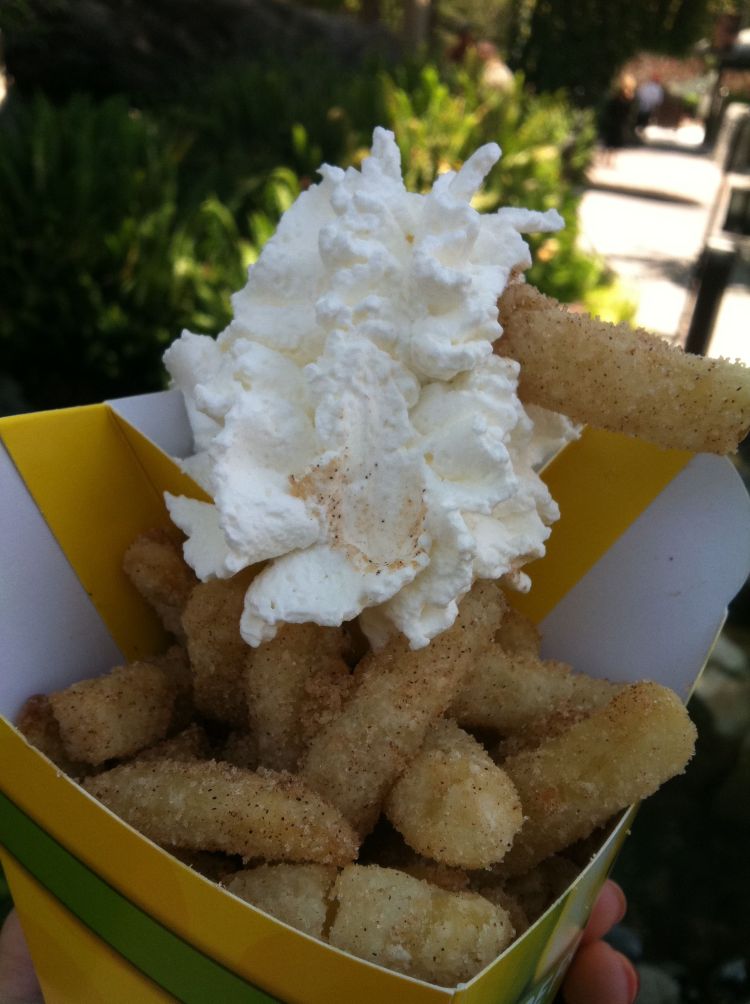 Legoland has a totally geeked-out Star Wars-verse, too. The kids were shrieking the entire time. 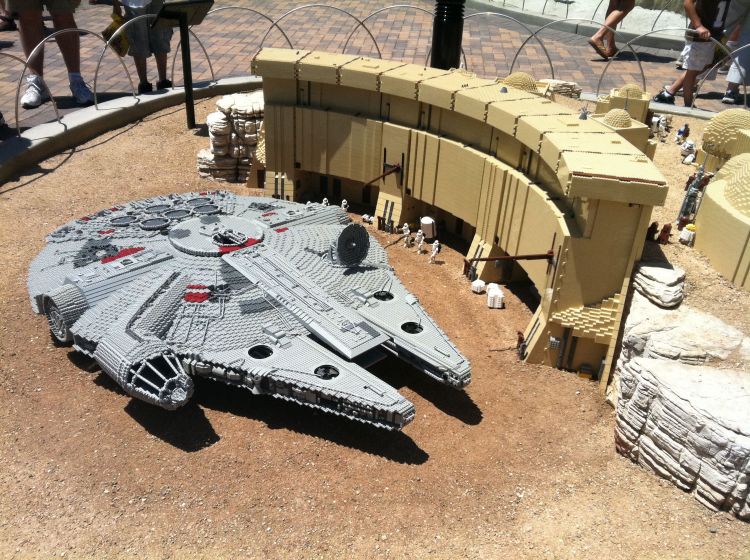