The video production went really well!  David and Kathryn Seay showed up at the stroke of one on Friday and got right to work rearranging the furniture and plugging in enormous lights.  Luckily, the gardeners had just gone, but of course the house next door, which is getting overhauled, had lots of saws going.  Every time the saws went off, the big lights dimmed.  (I know the saws caused this because it happened after the lights were gone, too. I guess it drains the whole neighborhood grid).

Anyway, I’d had the foresight to buy some sunflowers at the supermarket.  Like I’ve said, we came back from the Islands with pretty much the clothes on our backs, so we don’t have a lot of decorative items. The vase mouth is a little big for them, but it’s the only vase I currently own. (Sometimes I still search for things we used to own before we moved, like a crystal vase we used to have, which always makes me feel like I have misplaced it until I remember we just plain don’t have it).

Kathryn rearranged the book case to make a pretty backdrop with the sunflowers, and they set me up in a chair for the interview. We did a bunch of different shots in different places. At one point, Dave moved the sofa, and I found two toys and a piece of popcorn. Phew. That could have been a lot worse. The cat contributed by swatting at all the equipment like we’d been invaded by snakes, then trying to climb into various bags, so I had to shut him away or else he’d be in Texas by now.

I did not take any behind the scenes shots, because I was busy keeping my place on my spot in the chair and, well, forgot.

After we got the interviews and some other shots, like me typing away at the desk, the kids came home and we went to the park for more shots. Kathryn asked me to push the Little Girl on the swing, which made her indignant, because a great source of pride is the fact she does not need help swinging. Kathryn said we could just pretend I was pushing her, because of course Little Girl needs no help, which mollified the girl. The kids did a great job and avoided looking at the camera.

Later, we went down to Coronado and met at the Hotel Del to do some shots by the beach. Though it was overcast, it was great because it looked good and moody. I’d actually never been to that beach before, or to the Hotel Del, and it’s lovely. Everything is white and red. Afterward, we walked around the hotel grounds and through the little museum hallway and shops. The hotel is supposed to be haunted, and Cadillac asked if I’d like to stay there, and I said no because I’d be scared.

The next day, we went to the Japanese Friendship Garden and filmed there. It started out overcast, but the sun made an appearance. We also learned a lot about koi, such as all the koi in the pond are not competition grade. Cadillac, who was watching the equipment and talking to the volunteer, now knows exactly why each koi is not competition grade, so he can practically be a docent there himself. 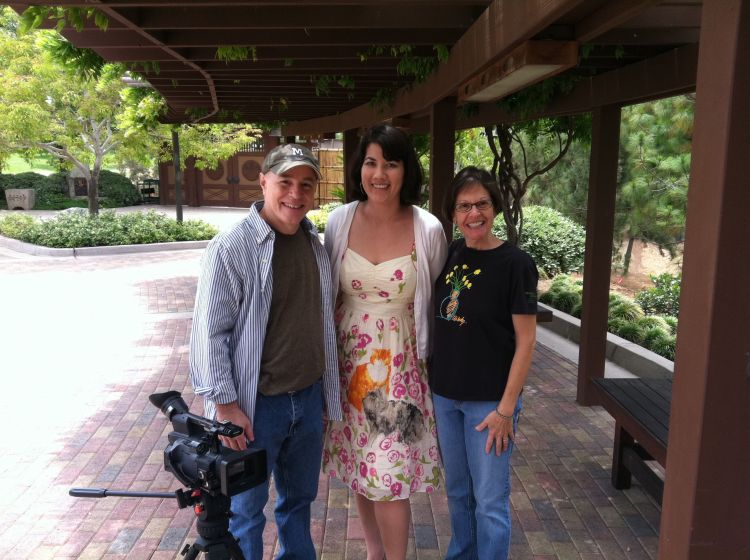 They did an excellent job, and I can’t wait to see how it turned out. But like I told my dad this afternoon, this is for a book trailer. No, this is not going in a national commercial that will air during America’s Got Talent; nor did Steven Spielberg see the reels and offer me an acting contract; nor did anyone drop off a bag of cash on my doorstep (Little Girl asked if I was going to make any money from being in the video). It’s still pretty exciting for me, anyway.