I had quite the authorial weekend. I know, my last blog was about a Big Weekend, but I think this weekend was Bigger Weekend on the book front. (And next weekend is my birthday, Super Bowl Sunday, which my devoted husband says he’s not even going to watch because it’s my birthday and he has something planned and which I did not ask him or hint that he give up).

On Friday, the San Diego library had its annual Local Author’s Exhibit. You got a medal when you walked in, and any book, self-published, on demand, or old school, was eligible (though I guess this did rule out e-books). 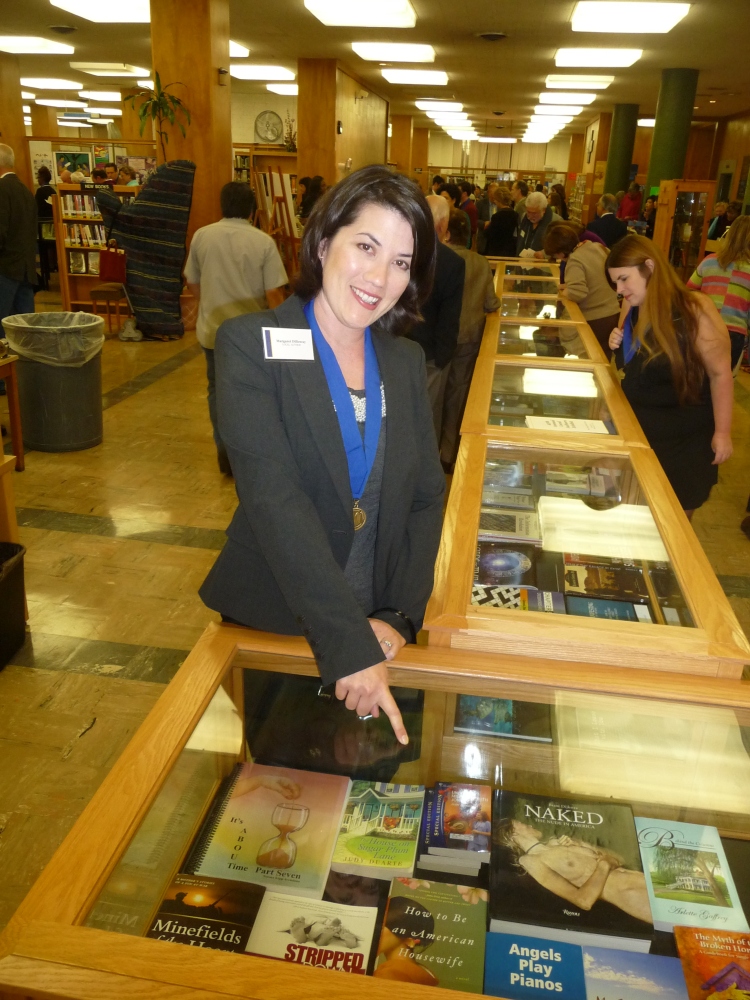 And no, I am NOT pointing to the book of nudes, but to my book, encased in glass like so:

Then on Saturday, Cadillac and I wandered up to the Japanese American National Museum in LA, where Jamie Ford was speaking. The MOCA gallery turned out to be having a free day, so we checked that out. I got this bronze shoe out of an art vending machine there, sculpted by a young man from Africa.

If you live near LA, you have to go check out the Japanese American National Museum (JANM for short), particularly if you have kids or have any interest in Japanese culture. Not only do they have Free Family Saturdays (Feb 12 is going to be Candy Land, with a CANDY BUFFET!) but they have discussions and demos. Plus, Little Tokyo is adorable, and it’s next to China Town and Olvera St (Mexican shops and stands)

Then we went over to see Jamie Ford. Jamie Ford, as you probably know if you read this blog, is the author of HOTEL ON THE CORNER OF BITTER AND SWEET, which has been on the NYT Bestseller list since around the time it came out last year. And no, Jamie is not a girl, but a half-Chinese dude. Jamie was one of the first authors to give me a blurb. Plus, he is exactly as nice and funny as he appears to be in his Facebook updates and blogs and interviews. He even gave my book a plug!

He spoke about writing the book, how he came to be a writer (hint: it has to do with watching a movie called JAMES AT 15)  and then turned it over to a Q&A. 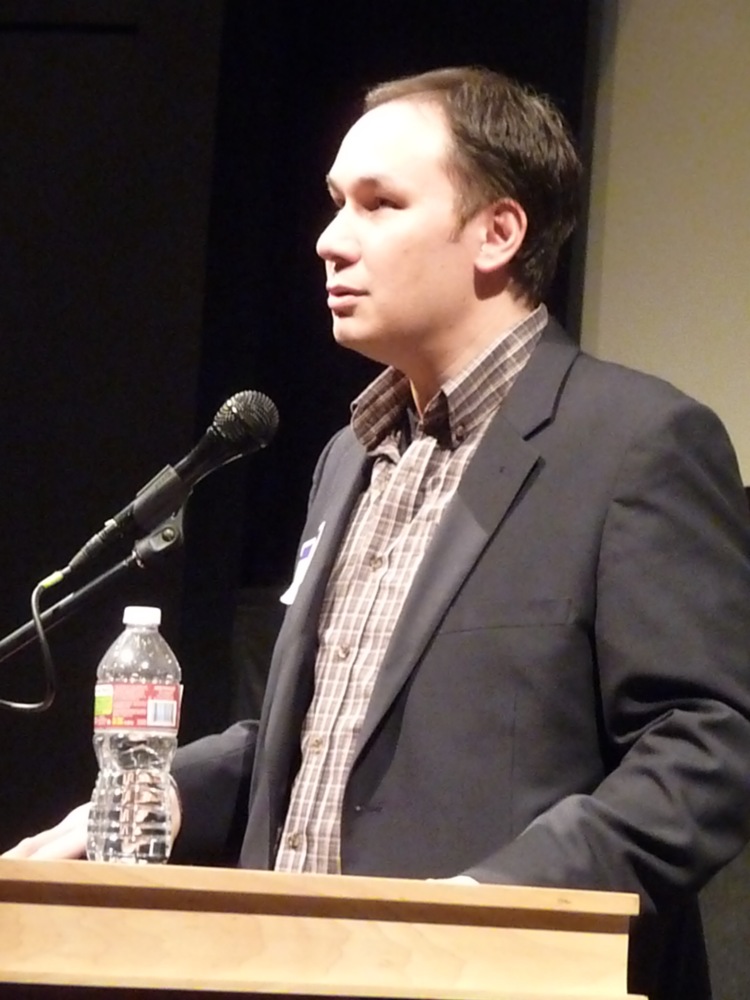 Then, while Jamie was signing about a zillion books, I snuck over to the JANM gift shop, where I got these adorable kokeshi dolls.

The gift shop lady was totally excited to show me how they nested, so we had to rip the box open.

Jamie and Cadillac and I all went out to dinner at the old-person hour of like 4 o’clock, but that was great because we could actually get a table in the still quite-crowded restaurant.

As we walked up, we spied a lady who had been at the lecture, looking at the menu and eating mochi balls on a stick. She turned and recognized me and said, “So, how’d you like his book?”

“Loved it,” I said. Oh, Lord, was she going to diss his book? Didn’t she see him standing right next to me?

We went into the restaurant. Umm, I think Jamie had a chicken dinner combo which came with sushi, and Cadillac had the beef one, and I had the ochazuke, which is green tea poured over rice(and, in my case, salmon) which I really wanted to try because I’d read about it. It’s not at all filling, and it’s quite plain, so it’d be good to have after a late night out.

Then, Jamie inducted me into the Super Secret author cult, which involved eating the liver of the fugu. If I didn’t keel over dead, I gained entrance. Luckily, just as in the Princess Bride, I’d built up a tolerance and so Jamie gave me the super secret key, which I believe also unlocks the stockroom at Applebee’s.

Here I am, looking very enthusiastic about meeting Jamie (and learning I should remove puffy coats for pictures): 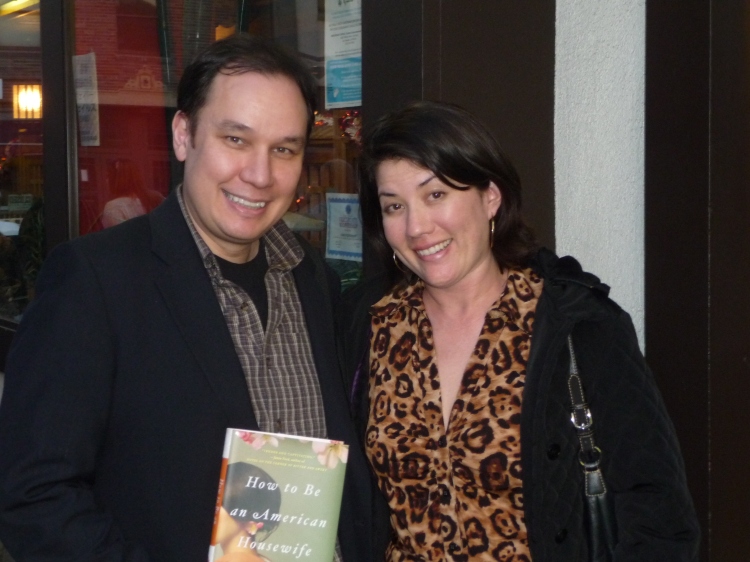 At last, we bid Jamie good-night and then I decided I should try the mochi balls with sweet sauce that the lady by the menu had, because I am a big fan of mochi, particularly grilled mochi so it’s crispy on the outside and gooey on the inside.

There’s also a Hello Kitty claw machine that my daughter told us we should have tried. 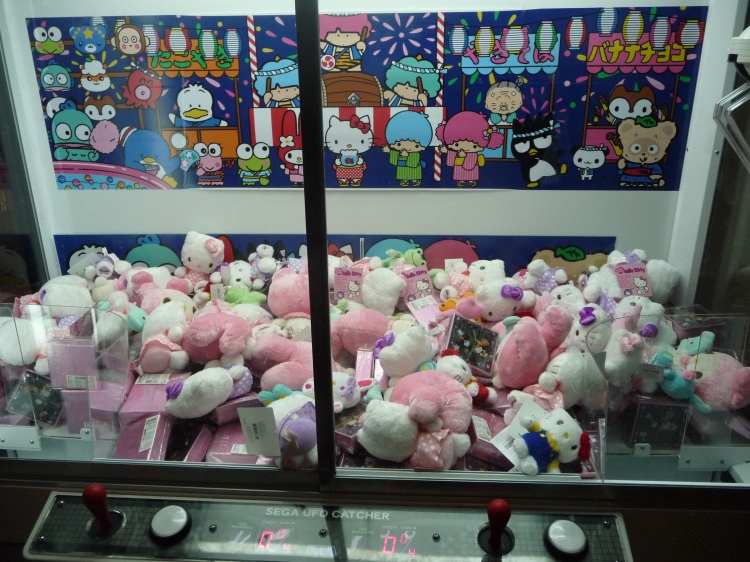