Finding a locally grown piece of lettuce that is not bitter is difficult in the tropics. That’s because nighttime temps are generally too high, resulting in a woody and bitter leaf.   I have tried over and over, with lettuce from the farmer’s market and even a locally grown brand of green leaf from Costco.  Each time, it’s tasted more like raw kale than anything you’d want to eat raw.  So the lettuce I’ve eaten tends to be shipped all the way from, you guessed it, California.

But recently, nighttime temps were cool for over a month, and I held out hope of finding a good-tasting, local green leaf lettuce.

I also wanted to eat something that did not require more than its weight in fossil fuel to be shipped to me. Funny, I thought I’d be eating guavas and mangoes every day here, but the only local fruit at the farmer’s market is papaya. Some people sell mangoes out of their front yards but want like $2.50 per, so barring fruit falling on my head while I walked around the Bishop Museum grounds, I haven’t had too much locally grown stuff.

Where to go? If you drive Lunalilo Home Road on Thursday through Saturday, you’ll see handpainted signs pointing you to “VEGGIES.”

I followed the signs to the veggie stand.

Behind Kaiser High School in Hawaii Kai, maybe a half mile or so from Koko Marina, in the shadow of Koko Head Crater, there are several small farms on a dead-end road. This seems impossible in an area where modern lot sizes are so small. Roosters and chickens wander about and there are no fences around the rows of greens on one side of the road, just signs saying NO TRESPASSING and a little old man in a straw hat meandering about.

The veggie stand sells $10 boxes of veggies, or veggies by the piece, at about $2 per. I looked at the lettuce and it looked thinner and more delicate than the usual local lettuce. The big box was by far the better deal. It contained:

They also had various herbs and huge beets, but I stuck to the box, handed over my 10 spot without waiting in line, and was on my merry way.  Oh, and I had Kaiya in tow, who was trying her best to jump out in front of the cars haggling for parking spots around the road, so I could not stick around asking questions about greens.

I was feeling especially organized and so I washed and cut up everything and bagged it. Good thing, too, because there were quite a few critters who had hitched rides.  Ants of new sizes and shapes, some giant, some small; spiders, small worms. Protein, anyone? 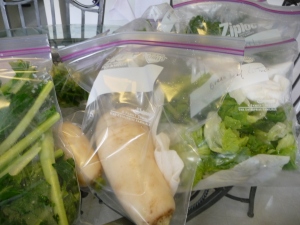 The box was meant to last one week, but it lasted us two. Mainly because I didn’t know how to cook everything and because we also had some broccoli from other sources we had to eat. 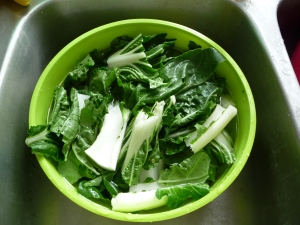 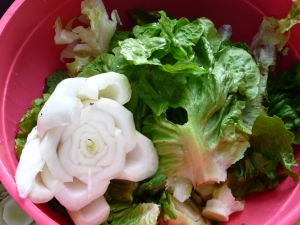 At this point, I wished fervently for a compost pile, or at least a worm box (vermicomposter?) so I could put these bits and pieces to use. But I have no garden, so it wouldn’t do me much good anyway.

One thought on “The Bitterness of Lettuce”