It is a well-documented fact that all insect-type creatures want to kill me or taste me. Consider these events from my childhood, when we lived backed up against Cowles Mountain in San Diego, and our house was never bug sprayed:

2. I heard a strange clicking under my bed (age 12) and found a Jerusalem beetle wandering around. I screamed. The beetle was extremely hard to kill. 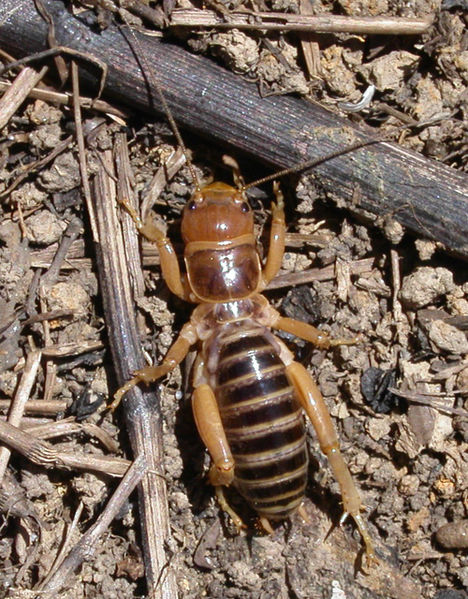 3. I found a rattlesnake waiting for me in the garage when I was little and coming in from playing with the sprinklers. It rattled and I ran inside. Yes, it’s not exactly a bug, but still.
4. I found a huge tarantula in the garage when I was a kid.
5. I went inside after playing on the swingset and used the bathroom and saw a huge spider hanging out on my shoulder.
6. Most disgusting: I woke up with something foreign in my mouth. I spit it out. Dead spider.
7. My mother, upon doing her nightly pull-up-covers check, found a scorpion crawling around on my bed. She tried to wake me up to see if I’d gotten bitten but I was too far asleep ( I was not).
8. I was near legally blind, but nobody noticed until I was in third grade. How could my parents not notice? I digress. But really.

As an adult, my interactions with insects lessened. I found the occasional scorpion in the house or had to deal with the occasional ant invasion after we bought that house near Cowles Mountain, but we began a heavy-duty insect spray regimen and the bugs lessened to a few flies here and there. There was the one memorable incident when I saw down in our Big Bear cabin rental and felt a sting on my eyelid. I slapped my eyelid instinctively and ran to a mirror to find a dead ant sucking onto my lid. What are the odds? In snow, there are scout ants falling off the ceiling onto ME? Me alone. Nobody else was harmed.

Today, because we live in Hawaii, I am forced to yet again confront my nemesis, insects. And they are out to get me. I witnessed a ghost ant, which are not supposed to bite, bite me. These are odd critters who can take up residence in shallow spots, like under the kitchen counter or magazine baskets. They’re difficult to eradicate for this reason.

I have also found several huge carpenter ants. We told the rental agency about them, because they can cause damage to homes, and they wanted to know where they are coming from. I don’t know! I found one upstairs, one down in the bathroom, and one on the couch arm next to me, inspiring this post. It was hard to kill and fell under a cushion. I had to thwack it and then squish it with a tissue.

Then there are slugs, which don’t bother me but sit benignly on the concrete getting squished. 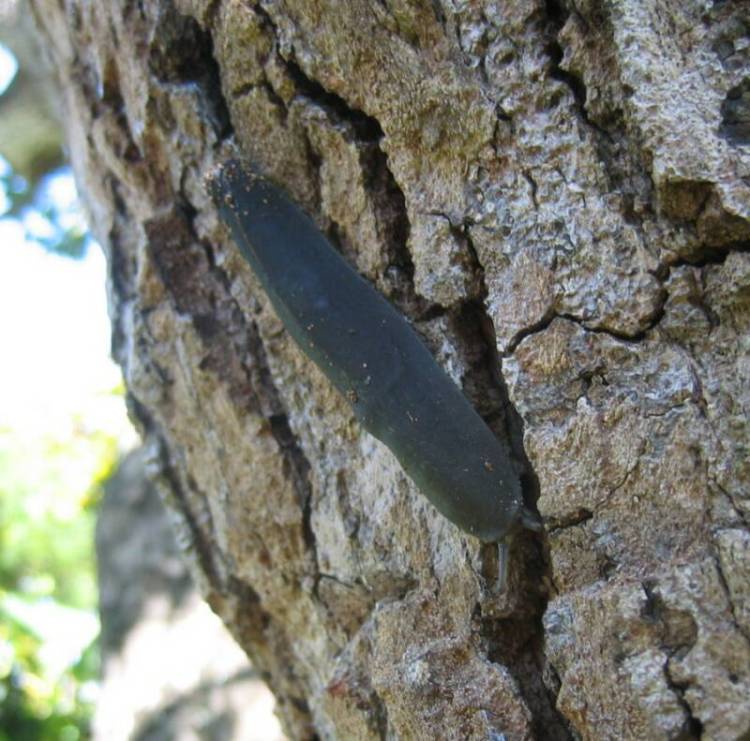 And cockroaches, which mostly stay outside but are notable for their ability to fly and their startlingly large size (3 or 4 inches long). Also creepy: they live in the grasses of the complex and when you walk at night, they run over your feet or fly up at you. It makes for quite a girly scream fest when we go to the pool at night.

Other horrendous bugs here are the centipede, which are usually HUGE (this one, in a photo I did not take, measures 8 inches). 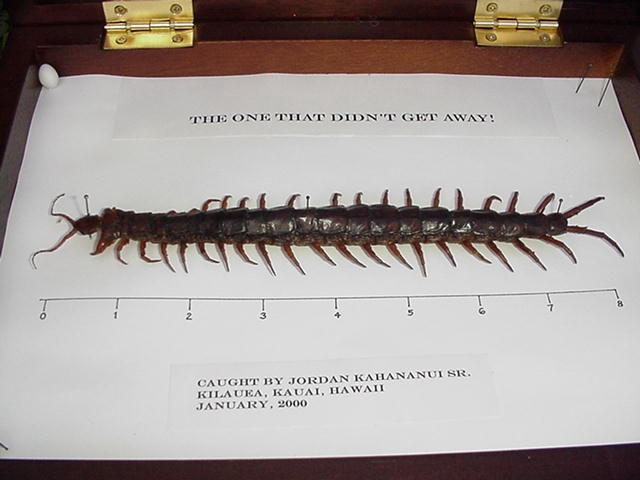 These do bite too, apparently; a little girl at preschool was bitten by one.

Or was it a millipede? My daughter learned at the horse ranch to run warm water over a millipede bite.

My first instinct when I see these creatures is to scream, the next: to scream for Cadillac. But if he’s not around, I smash them with whatever’s handy. I don’t even feel bad, because these are all known as Invasive Pests foreign to the islands. So kill ’em all!

Mosquitoes are a real problem for me. The odd thing is, I think they spray for mosquitoes in other parts of Hawaii, you know, where tourists visit. Because nobody else seems to have the mosquito problem like we do. Here in the bowels of Hawaii Kai, there’s a drainage canal with stagnant water and the resultant mosquitoes. Apparently, there are several different kinds. Some are large, some are tiny. None make noise and you can’t feel them until you get bitten. My bites get much bigger than silver dollars despite my antihistamines; I eat bananas, take garlic pills, and put on Burt’s Bees natural repellent, but I still get them. The only thing that works is DEET, but I can’t use DEET 24/7, as it makes me itchy and I’ll probably die of a DEET reaction. Other people said the mosquitoes get “used” to you and you don’t get bitten. Not me. My legs are covered with white and red scars from my bites. Still the bites continue, still my reactions continue.

The worst thing is, they hide in wait in the carport, then get into the car with us when we open the door. Several times the kids have screamed about mosquitoes and I’ve pulled over to try to kill the buggers. Eight hours after a trip, I’m covered in fresh welts. Most disgusting: when a new mosquito flies into your house, you smash it, and your hand is covered with blood…not your own. Ew!

Also a real problem: biting flies. Every time I go to the park, or outside, flies bite my legs. If there are mosquito bites on my legs, they sit on the bites and bite them even more, probably trying to make me into Jeff Goldblum in the FLY or something.

In short: I have bad karma where the natural world is concerned, and should probably just build myself a nice bubble to venture out in.

Here’s more on Hawaiian Invasive Pests, if you’re into that kind of thing.