I have a lot of hair. By a lot, I mean that every time I go to a hairdresser– even the same one I’ve been going to for years– he or she remarks, “You have more hair than anyone I’ve ever seen!” The floor is covered in what looks like reproducing Tribbles.

You’d think this would be a blessing, but it often means that my hair is uncontrollable and very hot on my head. Hawaiian weather makes it worse. It’s humid and my hair has become oddly, randomly curly and sticks straight out in all directions.

It also means that I MUST visit a hairstylist who costs a bit of money. A mere mortal will not do. Average hairstylists quake at my hair, they shred it, they turn it into Golden Girls styles that make the soul dark.

I had a stylist in San Diego that I liked. Here, I told my husband to look around his office for a woman with a shortish, precise-looking bob and ask her where she got her haircut. I know, BRAVE, right? He did it. The woman recommended Joy at J Salon, who has tried out several hairstyles on me. Joy recently got back from Vidal Sassoon training in London. She is a great stylist, and she’s been trying to help me out. She always flatirons the hair, which I never do at home, and usually the humidity makes it FLOOF out all crazy. 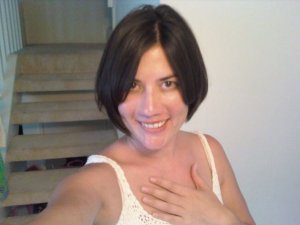 This nice hair turned into this when I walked outside:

Last time when I visited Joy, she squinted at my head and said, “How do you feel about short hair?”

“Hells yes,” I said. To get a short haircut, you must trust your stylist and your stylist must be excellent. Otherwise you’ll end up looking butch.

So we went short.

Then I went home and we played around outside. It immediately morphed into this: 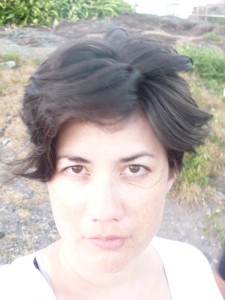 But on the whole, when the wind isn’t whipping it around, it looks cute. It’s more manageable. It dries in minutes.

I have gone through a lot of hairstyles in the past couple of years. For awhile, it was like Catherine Zeta-Jones in CHICAGO, with the bangs and the short bob.

I had it shagged. Some hairdresser in El Cajon gave me an emo look, which I promptly hated. I grew it out (long hair is too hot!), I chopped it off, I grew it out.

Sometimes I’m concerned because my book picture is in no way going to match my real-life hair. I thought a book picture was like acting: you have to get a new headshot when you get a new look. Apparently, it’s not. I found this out when I met some authors in person and noted that their book pictures and publicity pictures seemed, kind of, from a while back. I guess no one expects authors to look exactly like their photos, just a reasonable approximation. Which is why I’m glad I’m a writer, not an actress like I wanted to be when I was younger, because it’s way cheaper to get a picture taken every ten years rather than every year.

And who knows? Maybe I’ll grow it out again by the time my book comes out. I have time. But I’m actually digging the short hair. It makes me feel grown-up and sort of French, not that I can imagine what it feels like to be French, but I imagine that if I (with my hair done, not floofy) sat in a sidewalk cafe in Paris, I could blend in.

One thought on “The Wild Ones”