I kicked a sea turtle.

Not on purpose. Actually, it’s more like it ran into me. I was innocently swimming along, parallel to shore, and my foot touched something hard and smooth. I thought it was a branch or a shell; I had no idea what it was.

Next thing I know, Cadillac’s yelling, “A sea turtle!” and up it pops ahead of me.

Of course, the kids yelled, “Where?” and looked in entirely wrong directions until he physically moved their heads to point at its fins. Then it disappeared as quickly as it had popped up.

This happened during one of the first times we went to Kailua Beach, my most favorite beach EVER. It pained me to have to move to Hawaii Kai, where the closest beach is Sandy’s, the one famous for people breaking their necks because the waves crash you onto the rocks. The other beach is at a bay, rock at the shoreline, where people only fish and boat.

Kailua’s only about 17 miles away, but it takes 30 or 40 minutes to get there, due to the scenic route through Waimanalo. This is an extremely beautiful highway where people (tourists) often stop their cars in the MIDDLE of the road to gape at the beauty while 30 cars honk at them. Also, the speed limit tops out at 45 in one area, then slows to 30 for the remainder.

When I first arrived on Memorial Day, I was a barely adequate swimmer. I could swim in deep water without drowning, but not very gracefully. I didn’t like to get my face wet and most of my swimming involved walking around holding a kid. Also, the water in San Diego is ice cold, usually topping out at a whopping 75 degrees in the middle of summer. The ocean is a bit scary to me, because a) you can’t stand up and b) there are all manner of sea creatures lurking about, which freaks me out to no end.

But in Hawaii, I started swimming.

At first, it was hard. When the Grandparents were here, we took Grandpa and Elyse to Hanuma Bay. Hanauma is a famous snorkeling bay just up the street from us. You have to walk way down into a canyon after watching a video about how you’re not supposed to disturb the marine life.If you’re a kama’aina (local) you get in free, after paying $1 for parking.

I’d been snorkeling in San Diego, but it was easy there. You just put on the gear and go out. No waves.

The waves broke right onto a coral reef that we had to pass over. Cadillac held my hand and tried to lead me over the sharp reefs; they were at my chest and the waves crashed directly on my head. I panicked and turned back.

“Just go through,” he said. Yelled, actually. I tried again. The waves churned so much I couldn’t see anything but bubbles. I went through one shore break, then another. I lifted my head and saw Elyse up ahead with her Grandpa. Elyse was panicking, too.

“Just hold on,” I heard Grandpa yell to Elyse, and then he grabbed her and led her through.

I was having no such luck. My mask kept filling with water. “I’m going in,” I told my husband, and swam back.

“I couldn’t tell,” I said, scared at the panic I had felt. I thought I was going to drown, despite holding his hand harder than I had since I birthed Ethan without drugs. We swam in the shallows and looked at the fish there.

I was afraid my husband would be mad that he missed the fish, but instead he squeezed me. “I’m sorry. I should have told you what to expect, what to do. But you did a good job.”

Before long, I looked up again and saw Elyse and Grandpa already ashore. “Elyse lost her fin,” Grandpa said, “and if I went for it, I would’ve had to let go of her, so I didn’t.”

We got out of the water and I saw Cadillac dripping blood. “Just a scrape,” he said, sucking on his finger, wiping it off the snorkel bag.

My stomach turned at the sight. I ran to the lifeguard station and asked for a bandaid. Another coral casualty was there– a young man with a big puncture ripped out of his foot. Ick. The lifeguard explained to both of us how to use the iodine swab, then I ran back to Cadillac and doctored him up.

“I swallowed a GALLON of seawater,” Elyse said about two hundred times on the hike back up to the parking lot. “A GALLON.”

I took my snorkeling gear to the pool and practiced. I dove, but it hurt my ears and I couldn’t get the pressure out. I tried again and again, holding my breath, clearing the mask, getting water in the snorkel on purpose, churning the pool with my hands to look like waves.

I learned to get my face wet and not mind, how to exhale through my nose and take a breath through my mouth, how to use my arms to propel myself properly. I stopped feeling panicked when the snorkel was on.

“The ocean is playing with us!” my son exclaimed one day at the beach, and I closed my eyes and felt it, the tide pulling us in, back out, side to side, gentle waves and bigger waves. It was interesting how it changed from day to day, from morning to afternoon. You can never get bored out there. I began learning how to swim with the ocean, with the waves.

Yesterday, we went to Kailua, as we do at least once a week. This time I brought fins. There are cones about 50 yards or so out, marking the swimming area. I decided to try to go around the cones. My goal is to swim out to the little island, beyond the boat launch, with Cadillac (we have to wait for babysitters to do this).

I got out to within a few feet of the cones and looked back. My husband waved at me. I didn’t seem far out, though, because a woman towing a little boy on a boogie board swam by. I noticed I was treading water, without thinking. I noticed that I could put my face right in the water and rest it there, like a pillow, effortless, as I swam. Then waves started hitting me and I decided not to press my luck and came back.

“Good job! That’s the farthest you’ve ever been out,” my husband said. “I was ready to come get you if you needed it.” 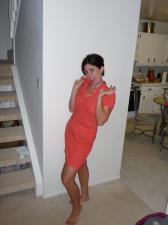 A pleasant side result of all this swimming is that I’m very tired at night, so I can actually sleep well on nights after I swim. My muscles ache pleasantly and I’m actually getting very toned, more than when I went to the gym every day. It’s a bit addicting, in the best way.