Recently, I asked the kids’ pediatrician for a referral to the cardiologist, so they could get echocardiograms to see if they have noncompaction cardiomyopathy, the genetic heart condition that runs in my family. I am hoping the kids got Cadillac’s heart. Everyone in his family, on both sides, lives into their 90s, as long as they don’t smoke or drink really really excessively.

The pediatrician’s nurse gave me a number to call to make an appointment, so I did. The cardiology scheduler said, “If you need an echocardiogram, call your doc and get a referral for it, and then you don’t have to come in twice. Right now, I am only allowed to schedule you for a visit, not tests.” So I called the pediatrician back and asked for an echocardiogram referral.

Ped: “I am not comfortable giving you an echo referral because I don’t know enough about the disease, and the pediatric cardiologists have their own protocol as far as the age when that will be done.”

Me: “I don’t want to make two co-pays because it will cost $180. Also, I know about the disease, and it’s present from birth and nothing except an echo will tell them anything.This is what my cardiologist told me to get.”

Ped: “I don’t know enough about the disease. I am not comfortable giving you an echo referral. It won’t hurt them to wait a few more weeks.”

In the meantime, a DIFFERENT person from pediatric cardiology called up Cadillac and made appointments for all three kids. For what? Echo, EKG, and a doctor visit, all in the same day. See? Ta-da! I figured a cardiologist had looked at the referral request, and said, “Hey, nothing except an echo will tell us what we need to know. Schedule them.”

However, last night (late for office hours, about 6 pm), Cadillac (for some reason, they only have his number) got a call from the pediatric cardiology department saying that that there wasn’t enough time to do all three things in one visit and someone else had accidentally mis-scheduled it, so could we come in tomorrow (i.e. today) and do the echos? And we would need to have two adults. And we need to get there at 9. And if we didn’t, we wouldn’t get seen until August.

So the kids didn’t have to go to school today and Cadillac had to take some time off work and we trouped down there. It took about an hour per kid, because they look at the heart very thoroughly in kids, more thoroughly than in the adults– my echo took maybe 20 minutes, for instance. They were able to do kids at a time, so in total we were there a little more than three hours, with the waiting and everything.

Anyway, we are very lucky in that we haven’t had much cause to go to Children’s; we have been there just maybe three or four times. Once for Son to get his tonsils out and once when he was sick; once for Eldest when she was really sick and had to go to Urgent Care; and once for Little Girl to get a blood draw. Therefore, we’ve not had the necessity to become familiar with their layout. Their hallway signage is more confusing than the Naval Medical Center, which is really saying something. You have to follow many different signs to get to Cardiology, and sometimes there is not a sign on the wall but hanging down the hallway from the ceiling, so unless you actually look down the hallway you won’t see it. Also, you have to walk through a plain door. And sometimes the elevators are not marked ELEVATOR, like the one that went down to the cafeteria floor, which was only an elevator to floor 2, I think. I looked all over for a sign that said ELEVATOR and there wasn’t one; it just said TO CAFETERIA. (But it didn’t just go to the cafeteria). It might just be me, because Cadillac didn’t get lost like I did.

But they have a beautiful campus, with lots of nice soothing art to look at, which the kids enjoyed today. So even though we had to spend the whole morning there, it was actually a very nice environment and more like you were visiting someplace where you happened to see the doctor and got to play at the same time. The waiting area had a courtyard with a train-shaped play structure, and Son played tag with a boy, and Little Girl played Train to SeaWorld with another little girl (lots of imaginary dolphins on board!), so they were entertained.

After the two younger kids were finished, I took them down to McDonald’s (yep, there’s a McDonald’s there, along with a Ronald McDonald house) and then we found this beautiful garden we had seen from up above, while we were wandering around looking for elevators. 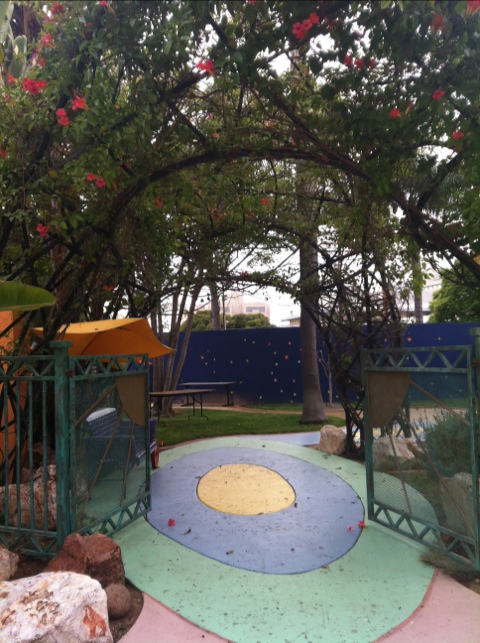 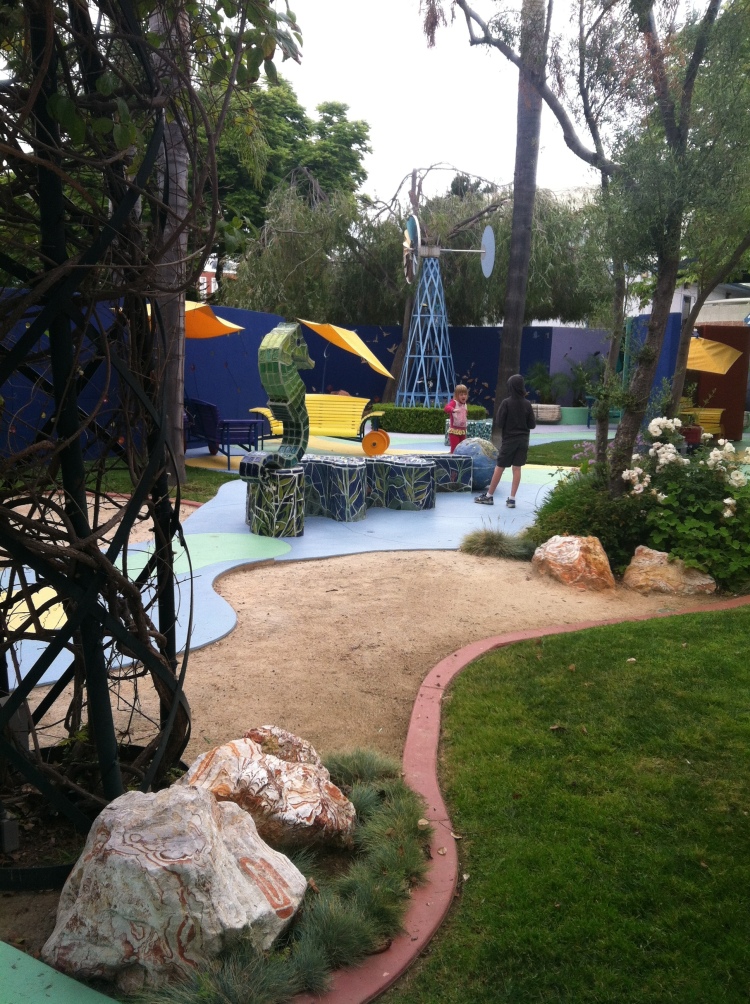 The kids pulled each other around in a wagon that was there. Unfortunately, Little Girl was pulling her brother one-handed like she was Hercules, and she tripped on this star. I was taking a photo, seen below. My shutter closed as she began to fall. I ran over there and the only thought I had was, “At least we are at a hospital! I wonder if they would make her wait in the ER if she got hurt on the actual campus? I wonder if people will hear her screaming bloody murder and come running?” Nobody came, though. I checked for blood and bruises, and she had some red marks, but she was okay, though she wailed for a minute or two as I comforted her. Her brother gave her his Happy Meal toy. After a few minutes, she was fine and the red marks disappeared. 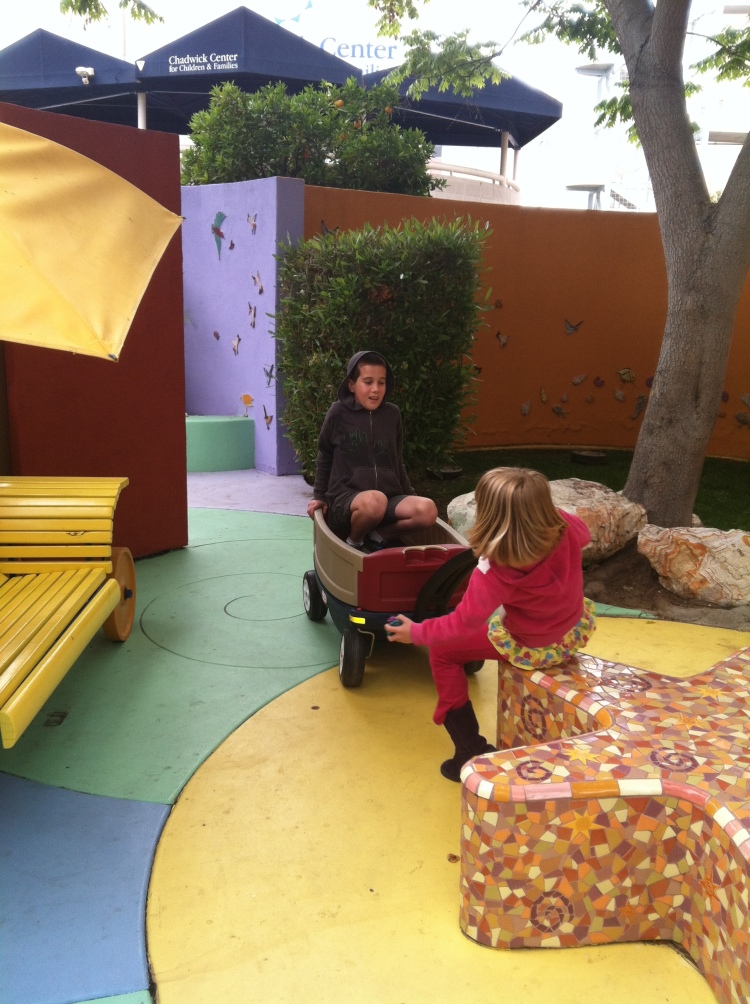 I especially liked all the different kinds of rocks they were using for seating and decoration. 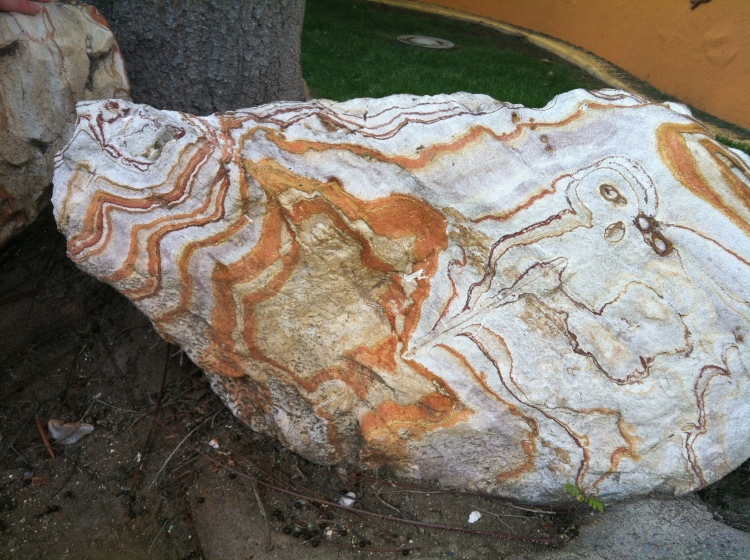 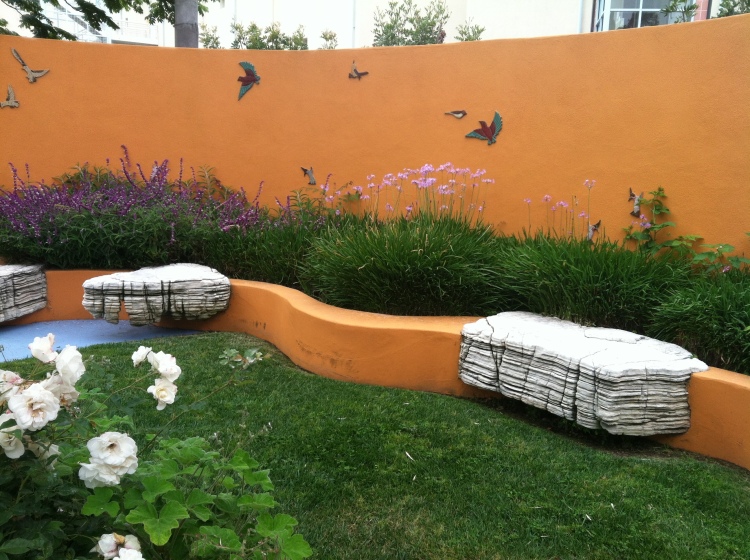 Tomorrow we get to go back for Part II of the visit. Yay! (That was not a real yay, in case you couldn’t tell.) But at least I know where the important things are, like McD, the cafeteria, the elevators, and the coffee cart. Really, I am grateful we have such a good hospital here, but I fervently hope our kids are thoroughly healthy, and we have little cause to go back in the future.

2 thoughts on “Morning at Children’s Hospital”